Will Gene Wilder Step out of retirement? 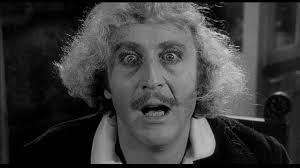 "Young Frankenstein" remains to this day as one of my favorite films of all time.

I have wrote about it on this blog before, and its possible I will again. But ever since I watched this back in 6th grade, after picking my picks for in-school fantasy football pool, I fell in love with it. It was something that sent a chemical rush through my brain, completely rewiring my brain. The world certainly felt like it shifted after my first viewing of the movie. Now, that may sound awfully hyperbolistic, and for that I apologize. This is a comedy, the best of all time. Its also a parody, the best of all time. But when we attach ourselves to our favorites; whether its movies, or bands, or foods or hobbies or whatever, we don't much care what anybody else thinks. I am happy with my list of favorite films, and I am honored "Young Frankenstein" has sat so high on that list for so many years.

Part of the appeal for that is Gene Wilder, an actor I have admired for my entire life. My admiration for Wilder started young, one night when my brother introduced me to "Willy Wonka and the Chocolate Factory." I could a four hundred page book about my love for that movie, but I will say that Wilder was the driver of that vehicle, and he lent a lot of the success to that movie. Gene Wilder is one of the greatest actors who ever worked in the medium, creating some of the most memorable characters the history of cinema has to offer. It has been downright sad that we have seen so little of him recently, but I understand the need to retire.

In speaking of retirement, it just so seems that several reports are coming in and Gene Wilder may break out of retirement to do one last movie. He is being pursued by none other than Steven Freaking Spielberg. Apparently, the director and the actor have been meeting about a potential movie, or are going to meet in the near future. I don't care when they meet, I just know I have to see Gene Wilder again.

What does Spielberg have up his sleeve? Right now, that's a little hazy. One report suggests an animated adaptation of "The BFG", another novel written by Roal Dahl (the guy who wrote "Charlie and the Chocolate Factory"). I certainly hope this isn't it, because if Wilder is getting pulled out of retirement, I want to see him. I want him to guide my emotions, I want to see him swagger on the screen in real life, not just simply hear his voice. But hey, that's my own personal hang-up. Right now, I am just glad that this is a possibility, and hopefully it will become more.


Posted by Shawn Hoelscher at 9:52 PM