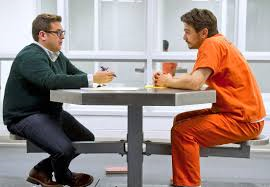 In 2001, a New York Times writer named Mike Finkel loses his job over a story containing misguided research. Desperate to keep writing and provide for himself and his wife, every avenue he tries to go down only has him coming up short, no newspaper or magazine is going to touch him after the faulty article he wrote. Then, as if out of the blue, he gets a call from a writer in Oregon asking about an alleged killer Christian Longo, who stole Finkel's identity when he killed his entire family. Instead of being outright disgusted, Finkel is drawn to Longo, and he plans to write a story about why Longo did what he did. Longo wants to help co-write the piece, and the two men plan to write it as a book. Mike suddenly tumbles down a rabbit hole, and he eventually doesn't know which end is up.

This great material for a movie. In many ways, it could have been another movie to put on the shelf next to "The Silence of the Lambs" and movies of that nature. But despite the wicked source material, and despite involving Jonah Hill and James Franco, "True Story" never connects. Not completely at least. With the inclusion of Hill and Franco, this isn't some kind of parody of the true story. Hill and Franco are in it to be serious, and they commit to the material thoroughly. Taken as a whole, they both do good work. But at the same time, there is a bland quality to their work. Neither actor makes the material particularly exciting or intriguing, which is shocking since its James Franco and Jonah Hill we are talking about. Some people complain when an actor plays the same character over again, and it can be argued that Hill and Franco do that on a timely basis. But when something like "True Story" comes along, they fumble with it.

I suppose its not entirely their faults though. Director Rupert Goold puts together a script that is wobbly and underwhelming all the through. Never once is the material that exciting, never once is there a spark of inspiration or thrill during any moment of the movie. "True Story" is oddly regular, and for a film about a real guy who got his identity stolen and to get caught up in a murder mystery should feel pretty exciting. Its not though, its tedium, inept and boring.

I think Felicity Jones does solid work here, and there is big moment between her and Franco that is really delightful. Had the movie spun on that type of energy the whole way through, we may have had something here. I also like the music composed by Marco Beltrami that sets the mood in just the right way. There is plenty of good here, it just doesn't coast on it for an entire movie. The script was not there in the beginning and all the extras in the world can't mold a lazy story into something marvelous.