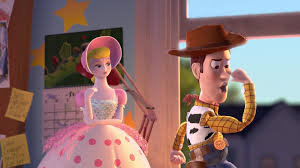 I immidately detested the idea of making a "Toy Story 4" when I heard about it. I know how hard it is to make a great trilogy. There are not really many great trilogies. Think about it for second, because lots of people consider a "great trilogy" to have at least two-out-of-the-three movies to be good in order to get such a supreme status. In my book, all three movies have to be awesome in order to reach such a compliment, and there aren't that many out there. "The Hobbit" is overstuffed, "The Star Wars" prequels don't land like the originals, heck, even "The Godfather Part III" has nothing on the first two films. Most trilogies run out of steam by the third film, leaving a very small list of truly great trilogies. "Toy Story" was always an exception. Each movie as fantastic as the last.

That is why I scoffed at the idea of making a fourth. Why destroy what a remarkable creation with a fourth film? What if the fourth film is bad, I mean what if its just plain good? It will taint the rest of the trilogy. If the fourth film is nothing less that flawless, people will forever remember it as the film that "was good, but not as great as the original trilogy." Why would Pixar want to do that with themselves?

Well, it seems its not a bad dream. "Toy Story 4" is coming...and its going to be a love story between Bo Peep and Woody.

Yep, you read that right.

We are supposed to hold our breath to see a love story between Bo Peep and Woody. I am baffled, because didn't Woody say Bo Peep was given away in "Toy Story 3?" I sure remember it. The "Toy Story" movies have been good because they tell human stories that we can relate to. How can I relate to a love story revolving around toys? This sounds like "Heartbeeps" for a new generation.

I remain skeptical of this idea, and until a trailer can somehow win me over, I will remain as such. But how are the rest of you thinking? I would love to hear all your thoughts.

Posted by Shawn Hoelscher at 8:26 PM