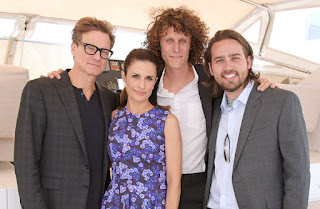 As you read this, I hope all of you are in a place of happiness and comfort. I know life has its ups and downs as we move along, and that will never change anytime soon. I just hope that as of right now, you are happy with your lives. I hope all of you are happy at a job, and that even though you work hard, the payoff is both good for you mentally, and good for your wallet. I think everybody deserves to treat themselves well every once in awhile, I mean its naturally unavoidable. We live in a consumer capitalist country, and the need to buy is a bombarding experience nearly every hour of every day. One business that is flourishing because of this is the fashion industry, as it takes in billions and billions of dollars each year. The big wigs of fashion have plenty of input, but where does that leave all the output? That is the subject of the fascinating documentary by Andrew Morgan.

Before the 1950's, America made nearly 95% of its clothing, nowadays we are only making 3% of our own clothing, the 97% is being outsourced to other countries to make. The H&M's, the Forever 21's, the Levi's of the world have gained big numbers of capital of this outsourcing. This leads to cheap labor from underdeveloped countries. The problem here is that these countries don't have strict labor laws, and thousands of workers are making clothing for us for a $10.00/month salary in horrid conditions. The other big problem is that these conditions are not just affecting the workers themselves, but are beginning to harshly harm the planet itself. These big fashion businesses get off without having to worry about labor laws and paying its workers. This has been a problem for years and Morgan takes a look at the ugly side of the fashion world.

We don't just learn about workers in Bangladesh, who work tirelessly to deliver us clothes. But he dissects how the constant need to throw clothes away to buy new clothes is putting stress on the environment. He looks at the chemicals used to create nice clothes, and how that is affecting the health of everyone living in those underdeveloped countries. There are also a couple of interviews with the garment workers themselves, and how their governments have silenced them in their efforts to obtain rights. Each issue is as harrowing as the next, and we see the pressure it is putting on our economy as a whole, and the answer given by Morgan is to completely reshape our capitalist economy.

But to become what exactly? If the United States of America is a consumer capitalist nation, what do we change to in order to keep people happy and live up to our nation's traditional values? This is where Morgan's documentary begins to get hasty. Morgan does a good job of showing us every little detail of what is wrong with the fashion industry, but presents very little we can do in order to change it. Or what to really change it to. Should we just throw business to the ground and become a communist nation just to appease outsourced workers? I don't want to sound disingenuous, because this is major problem in our economy and much of "The True Cost" is shockingly heartbreaking. The thing is, a documentary always runs the risk of being preachy for the sake of it, rather than creating a thought-provoking debate of what can come out of the mess presented. I think Morgan's documentary is a little too preachy and there is no evidence given about to pick ourselves up from this economic mess.

That is also scene when the documentary touches on how advertising forces people to buy more stuff. While I feel that is a good psychology 101 lesson, it feels wildly out-of-place in this documentary. Which leads me to the fact that Morgan had a lot to say, but no idea how to say a lot of it. Still, I think "The True Cost" is an eye-opener. I think it will give its viewers something to chew on, especially since back-to-school shopping is just around the corner. I do feel for the hidden workers of the fashion business, and I wish there was more we could do for outsourced work. But how can we change the system? It doesn't even seem Morgan himself knows, but perhaps that was the entire point of the movie. For us to find the answer ourselves, and if so, I need to think about it. But "The True Cost" sure does make me second guess going to the mall for clothes and heading straight to Goodwill.

FINAL GRADE: B﻿
Posted by Shawn Hoelscher at 8:44 PM