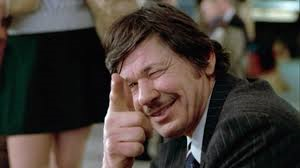 I love a good revenge thriller.

I think revenge movies resonate with so many of us, because it represents the best and worst of all of us at the exact same time. I think any normal person would do anything for their families, to protect them, keep them safe, make sure they have everything they need. When that is taken, it would hurt, and the natural response for human beings is to find answers. When people go to the legal system, they expect a good result, but the legal system, like nearly everything else, is run by human beings, and humans make mistakes sometimes. Now, looking back at all the famous stories of people loosing loved ones and they loose a case, which forces them to kill? It does not happen very often. There is a very Western feel to a revenge movie, which is something I also dig. I also kind of feel the great revenge movies are better now because of what is happening in our country now. There are several people who feel we are giving too much power to police, and that power is making things worse. Is it true? Who knows, this is not the time or the place for it, but its definitely relevant to the discussion of when its appropriate to take something into your own hands.

"Death Wish" is the filet mignon of revenge movies. It stars Charles Bronson, the badass of his time. "Death Wish" is pretty simple in plot, Charles Bronson plays Paul Kersey, a normal man with a loving family. He has done very well for himself, and even though he lives comfortably, he can't help but notice the brutal crime that has taken over New York City, his home. But deep down, he feels, just as we all feel, it will never happen to me. Then suddenly one day, three muggers follow his wife and daughter home. His wife is brutally beaten, his daughter is raped and his apartment pillaged. Its a horrific scene, incredibly intense for its time. Paul Kersey goes to the police for help, to no avail, he then takes the law into his own hands. Night after night, he goes into the shadows of the city, and murders muggers in cold blood.

So yeah, its as simple as it gets. So why is it the best revenge movie of all time? Well, even though I have a soft spot in my heart for most revenge movies, I think all of them are guilty of something as whole. They all revolve around ordinary citizens, usually at least. Then when it comes to the part in the movie where the ordinary citizen starts killing criminals, they become invulnerable superheroes at the drop of a dime. While some leaps of logic need to be made with movies, it feels a little too unrealistic and that can be irritating. I know for fact that if I all of a sudden decided to become a murderous vigilante, it probably wouldn't go over so well the first night. "Death Wish" takes the time to humanize its characters. The movie is a slow-burn to the point when Paul ventures into the night to do some criminal hunting. There is a powerful scene when Paul kills his first victim, and he is so disgusted with himself that he goes home and throws up. There is a sense of realism that makes the experience better.

The movie takes its time, building its character. I think Charles Bronson does outstanding work here. I am especially impressed how happy-go-lucky he is in the first half-hour and how drastically everything changes for him for the rest of the film. It feels like a natural process, and I give him lots of credit. I love how he tries to go to the police, nothing changes, he meets a friend on a business meeting who teaches him how to shoot, then he notices the new friend gives him a gun as a gift. He fights the temptation to kill people, another aspect of the film I really liked. Even when Paul becomes a full-fledged vigilante, he makes up his persona as he goes. It almost feels like "Batman Begins" in the way we see somebody create a persona, and we go on that journey with them. We their successes, their failures, and by the end of the movie, we see who they were always meant to become.

Oh, and if you like Jeff Goldblum, he appears here as one of the muggers who breaks into Kersey's apartment. His first acting part ever for people who like trivia.

If you like revenge thrillers, you owe to yourself to see "Death Wish." It began an era that we still feel today.