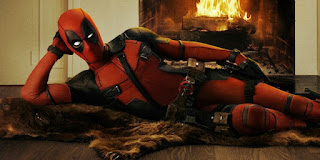 Last night, I declared that "Deadpool" had the best trailer for a trailer that cinema could muster. Now, I have seen the near three-minute, red-band trailer for "Deadpool."

Currently on Rotten Tomatoes, "Fantastic Four," the movie coming out this weekend, holds a 17% rotten rating. Now, not every critic has seen it yet, so keep that in mind. But also, it feels like bad buzz has been dragging this movie down since its inception. There are several who think that Fantastic Four will go back to Marvel after its second attempt of storytelling bombs. But what if it doesn't bomb? We shall see. I just know that Fox is a lot less willing to give up its toys than Sony is, and when you see trailers like "Deadpool," you understand why.

I wish Fox was hiring people who just as passionate about "Fantastic Four" as they were for their "X-Men" movies, because everything pertaining to "X-Men" is killing it right now, and its pretty clear Disney won't get those rights back for awhile. From the "Deadpool" trailer, its clear a bunch of Deadpool fanatics came together to get this movie made. Anybody who loves this character will stare up at the screen and say, "Yep, there is Deadpool!" I am so happy that this character is being taken seriously, and what makes the character who is will be applied to this movie.


Posted by Shawn Hoelscher at 9:39 PM