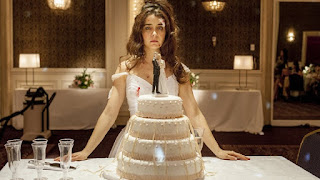 There is a segment of this movie, the segment that opens the movie. It shows a model getting onto a flight, and she is assisted by a man who is sitting across the aisle from her. As the flight takes off, they have a little chat. She is a model and he is a music critic. She tells him she once dated a musician and in describing her ex, the critic figures out who it is. In an ironic turnaround, this critic heavily criticized some of her ex's work. Then somebody else on the flight overhears their conversation, a woman who is an elementary school teacher. Apparently, this teacher also knew this mysterious musician, when he was a boy, and she scolds her past with him. Then somebody else, and another person, and another and another. It becomes quite clear that every person on this flight knew this musician, and they all wronged him in one form. All the while we learn this, it is evident that this flight is strangely and eerily small for such a big, commercial plane. We know by this point that something very bad is going to happen to the passengers, and it was this opening segment when I knew that "Wild Tales" had me.

"Wild Tales," the new Argentinian film by Damian Szifron, is a collection of some of the weirdest fables I have seen put on the screen in a long time. The stories really are not connected in any way, but they all have one thing in common, they all are very wild. What drew me in to each story was how freshly unique each experience felt. "Wild Tales" is a movie where you should leave expectation, cliché and prediction at the door, because known of these stories unfold in a manner you will be used to. Even though some segments end just about the way you think they will, its the journey from start to finish that feels so noteworthy. This is not typical Hollywood filmmaking, this is an anti-formula, with each new adventure well acted, well written and well executed.

Among the storylines feature a gangster who walked into the wrong diner, a rich man who has a particularly nasty showdown on a highway, a demolitions expert who has a mistrust for seemingly the entire world, a business deal going down in the light of a major event and the final segment is a wedding from Hell. These are some of the most warped fables you will ever witness. Not only are all these segments wild, they greatly master the wonders of cinematic inspiration. They represent the celebration of filmmaking, and the very best of original filmmaking. Some stories are gruesome and others are funny (in a very dark sort of way), but all seem to offer the proposal that the world is random and it is even dangerous, so we must always be at our best. We never know when karma is going to come knocking on our door, and that idea is beautifully etched throughout the entire movie.

This movie is brought together by some wonderful Argentinian actors. All of whom deliver an emotional punch in each of their respected segments. I can't tell you a single thing about this cast, I have no idea how long any of these actors have been working. I have no idea if these are veterans or newbies of the business. All I can tell you is that Szifron perfectly casted every single role of every single segment. This cast dedicated themselves to this movie, and it shows with every single frame.

In a world that is largely dominated by the release of blockbusters, something so fun and so off-the-radar was an instant delight for me. "Wild Tales" offers up the very best of what can happen when an artist believes in their art, when they are completely taken over by their craft. "Wild Tales" is unforgettable from the beginning shot of a woman getting on a plane to the very last shot at the wedding. "Wild Tales" might be blunt and delirious, but it is one of the best films I've experienced so far this year.