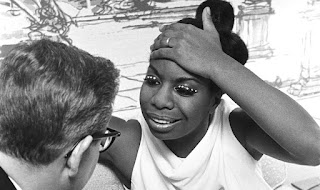 I have never discussed this on my blog before, but I am a huge Nina Simone fan. I have a collection of some of her greatest hits on my ITouch, and I listen to it pretty frequently. Listening to a Nina Simone track is unlike anything else, she was in a class of her own when she was hitting the big time. Her songs were so long, yet so unique at the same time, that they felt like experiences more than anything. Unlike so many popular artists in music, Nina Simone was a gifted storyteller. I guess in a way, I am the target audience for something like "What Happened, Miss Simone," a documentary by Netflix which details the story of the rise and fall of this wonderful musician.

I have noticed watching several stories about musicians and rock bands, and something I have noticed about myself is that I am glad I never became a musician, particularly a famous one. Sure, I fantasized about it growing up, who didn't? But now that I have several stories of musicians, both fiction and non-fiction, I am glad I never pursued that course of work. Like several famous musicians, Nina Simone's life was filled with highs and lows. She had to really work hard to be the person she became due to her race, she was politically active in the Civil Rights movements, she had an abusive spouse, she poured so much of herself into her work that she had no time for anything else. This sounds very similar to just about every other musician in history. And this documentary goes about revealing this information in the same way as just about every other music documentary.

There are several quick cuts of scenes of Nina live in concert, and even though this might be kind of a mundane way of revealing her as an artist, it showcases just how powerful a performer she was. There is no secret to why she became as popular as she was for this time period, there is no secret why she touched the souls of so many people. I just wish as a documentary, "What Happened, Miss Simone" was structured differently. Sure, Nina Simone had a hard life, and she was politically active, but how does that differentiate from several other artists and musicians of this time? The documentary does not offer any differences or explores why Nina stood out in this crowd.

I will say that I did learn some things. I had no idea that the great song "Mississippi Goddamn" was written in the wake of racial foul play, that I found interesting. But what I found most interesting was just how sorrowful Nina's life was. There was so much power in her music, that I guess it almost makes sense that she was so troubled throughout her career. Nina was somebody who was dedicated to her job, so much so that she may have missed out on a happy life. It makes me sad that my love of her music came from so much sacrifice on her part.

But, despite having the same mechanics as several other music documentaries, you can bet I will be popping in my Nina Simone tunes sometime tomorrow. This movie definitely got in the mood for some good music. But make no mistake, the movie may not draw in any new listeners, if you are sensitive to how music documentaries are structured, this might be a boring watch for you.