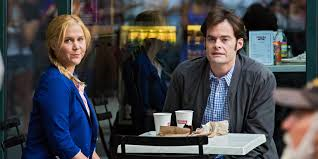 Before we begin, I'd like to tell all of you that I really like Amy Schumer. Her stand is actually quite hilarious. I have seen some of her stand-up skits, as well as some of her appearances on talk shows. I can definitely see why so many people like her. I can definitely see why so people are referring to her as the "it girl." So when a comedy as her in the lead came out, it definitely sparked my curiosity, especially since she wrote the movie too. What I did not know until the end credits was this film was directed by Judd Apatow. This guy produced the "Anchorman," movies, "Pineapple Express" and "Step Brothers." This guy directed "Funny People," "Knocked Up," and "40 Year Old Virgin." Apatow is one of the very best filmmakers working in comedy right now, and I mean that. With so many great people attached to this project, how could it go wrong?

The answer is very wrong, "Trainwreck" is a train wreck of massive proportions.

Let's get the good out of the way before we get too much further in this review. I would be lying if I said I didn't laugh. There are some funny parts in "Trainwreck." You will have to watch lots of terribly movie in order to get those funny parts, but there are some funny parts in the movie. I liked Bill Hader, I liked Colin Quinn, and you will not believe your eyes when you lay them on Tilda Swinton. She disappears in her role, and it took a few scenes in order to really see that it was her. The most surprising thing about "Trainwreck" was LeBron James. Yes, that LeBron James. Yes, I am serious, he's pretty much the best part of the movie. I usually can't stand it when celebrities with day jobs try to act for the sake of it. But James actually does surprisingly well. He plays himself and he is a good friend of Hader's character. But I have to say, the film is rather remarkable in the way it uses James, and how easily he flows in the movie. I still can't stand him as a person, and I don't automatically want a "Space Jam 2" because of this, but I was indeed surprised.

The problems start by the beginning. I don't mind raunchy comedy, there have been plenty of good comedies that had a dirty edge. What makes something like "Animal House" funny was that the jokes landed, and we liked the characters, even if they were drunken dropouts. Nearly every character in this entire movie, including Amy Schumer's character, is outstandingly unlikable. In the comedic genre, we have to be able to identify with the characters, otherwise how can we laugh? I don't find people I don't like funny, and maybe that is a personal hang-up, but almost all the characters in this movie are repulsive and disgusting.

Another key ingredient to a good comedy is...well...comedy. Seems simple right? Well for a movie being written by Amy Schumer, I figured I would be laughing the whole way through. While it is true, there are "some" funny parts, I have to really stress the some. For a two hour movie, I felt the laughs came far and in between. I really have never cared how long a comedy was, as long as I was laughing. You can feel the length of this movie, and before the halfway mark, I already wantedto go home. It's that humorless. Barely any of the jokes landed, and lots of these jokes revolved around sex. If characters are making sex jokes and the sex jokes are not funny, they just come as gross individuals. We all had at least one friend in grade school who knew more about sex and other adult subjects compared to the rest of the class, and they always seemed to lord this information over every body else at school, that's "Trainwreck."

On top of all that, "Trainwreck" is just an odd movie. It tells the story of a party-animal Amy (Amy Schumer) who takes pride in cheating on her boyfriend (Jon Cena). Its also a movie about how Amy butts heads with her married sister (Brie Larson) because Amy doesn't want to settle down. Its also a movie about how these two sisters care for their hateful father (Colin Quinn). Finally, its also a movie about how this party animal finds love with a sports doctor (Bill Hader) and how even the sleaziest of people can find romance. All of those ideas would make interesting movies, the thing is "Trainwreck" doesn't know which story to tell, so it tries to tell all of them. "Trainwreck" is poorly structured and a coherent dead-end, so it ends up looking like a big mess. Plus, its completely confused as far as its theme goes. This is a movie that doesn't know if it wants to be a dirty, sex comedy or a romantic comedy, so it tries to be both. The thing is, those two comedic subgenres are radically different from each other, and the film never transitions well between themes and styles. Once again, "Trainwreck" looks like a huge mess, a bunch of ideas for a movie plastered together with no structure or no coherence.

I can't remember the last time I was sitting in the theater, and was already wanting to go home after the first ten minutes. That should say something, as I have already seen some really bad movies already this year. I guess Schumer better stick to stand-up. I guess Apatow better get back with his usual crew and start making good comedies again. While there are some funny parts, and a couple surprising performances, "Trainwreck" is an unfunny, tonally-odd mess. For everyone involved, it is also massively disappointing.