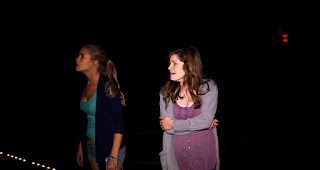 Why are people so drawn to found footage movies?

For me, I think the device can be a wicked little tool if used in the right way. The best of the genre, the scarce "Blair Witch Projects" and "Paranormal Activites" do it well because they create an unrelenting atmosphere. When used correctly, there is a gritty realism that can be hard to shake. When "The Blair Witch Project" originally came out, everybody believed it was real. I still know several people who are absolutely convinced that three college students died somewhere out in the Maryland forest due to an evil witch. When a movie can be that convincing, that's an example of power, pure and simple. The best found footage horror movies create a disorienting, surreal, yet realistically authentic experience for the viewer, casting a spell over them with ease. The worst found footage movies are those made solely to sell tickets. Its a gimmick with no payoff, empty scares and just as empty character and execution.

"The Gallows" is an excerise in the latter category. It is a gimmick with no payoff. The movies sole creation was to sell tickets, and nothing more. There is nothing scary that happens in the movie, or barely anything that resembles intensity. The ending aims for creepy atmosphere, but ultimately fails. "The Gallows" is just another movie in a long line of found footage movies that focuses on a bunch of asshole kids, who we watch die one-by-one. If you think I have spoiled anything for you, then it would appear you haven't seen too many found footage movies, a fact you should be happy about.

The reason for this whole movie is about Reese Houser (Reese Mishler) who plays football but also videotapes the fall play at his high school. He does this...because, honestly, its never explained. I guess the filmmakers couldn't come up with credible reason for a high school student to be videotaping play practices, football practices while he practices himself, or even high school sessions. No high school on the planet would allow that unless the student had special permission, and that is never explained or explored. The film really needed this found footage gimmick, and as an audience we are supposed to ignore its justification.

Reese has a friend named Ryan Shoos (Ryan Shoos) who is also on the football team, but quit to do the fall play so he can get closer to Pfeifer (Pfeifer Brown), the school's biggest drama supporter. Reese doesn't want Ryan to quit football, and believes he can still win Pfeifer over without doing the play. After discovering a broken door that has never been replaced, Reese gets Ryan and his girlfriend Cassidy (Cassidy Gifford) to break into the school through the broken door and trash the set, therefore Ryan doesn't have to quit football for the play, and can hone his energy on winning over Pfeifer.

And these are our lead characters for a movie? These are the people we are supposed to care about? Seriously? As a 26 year-old, these are the type of punk kids I make fun now. How is an audience supposed to care about a bunch of asshole kids who break into a school to vandalize it? Specifically for the weirdest and least thought-out reasons I have seen in awhile? I have read lots of banter against found footage movies because the audience can't connect to the characters, but "The Gallows" takes the cake on creating the worst characters revolving around the stupidest plot imaginable, nice going "Gallows."

But wait! In 1993 at this very same high school, the students were performing this same play Ryan and Pfeifer are starring in and that lead to the accidental death of the lead in the play. So the spirit of the dead lead comes to haunt Ryan, Cassidy, Reese and Pfeifer. Yes, Pfeifer suddenly appears in the high school at night too, wondering what everyone is doing there. The reason Pfeifer is there is the hugest cheat in any horror film I have seen in awhile, and it is pretty telling that the filmmakers were scraping at the bottom of the barrel to make this thing memorable. Why a high school would remake a play where one of their very own students died in is beyond me, and that is never explained either.

What ensues is a predictable, unscary little horror film. None of these young actors can act and never once do I ever feel like they are in any kind of peril. You can pretty much telegraph when every scare will happen, and the rest of the film is just a bunch of teenagers screaming at each other. There is no mood or atmosphere, nothing that makes a horror film scary. Plus, since these kids are all douches, we never once feel bad for them or identify with them. And that ending, God what a huge cheat.

I can really understand the hate for this once prominent subgenre. If Hollywood had a brain, they'd leave this subgenre alone until someone who knows how to use it breathes life back into it. Because if they are not careful, soon the audiences are going to flat out stop coming. There are so many people who feel the oversaturation of superhero movies is drawing nearer. The oversaturation of found footage horror is already upon us.