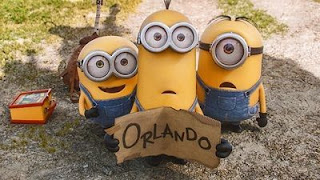 I have enjoyed both "Despicable Me" movies, and it has never been surprising that the minions became the most popular thing to come from those movies. It almost seems like they were designed for that. I remember the marketing in 2010 for the first "Despicable Me" movie, and what drew lots of people to the theaters that summer were the minions, these overgrown LEGO-looking people that only spoke gibberish but were funny nonetheless. The first TV spots that landed on television for "Despicable Me" were just the minions goofing off, then the title was presented and that's it. We didn't get a whole lot of storyline in the early marketing, but we were so drawn to the minions because they were cleverly created.

Just because a group a characters become a golden goose for a franchise doesn't automatically mean a prequel or stand-alone movie should be made about them. In fact, prequels are a tough project on a creative level. How can you make a storyline compelling if the audience already knows the outcome of the characters? Any tension or compassion for the project goes out the window. Most franchises are not designed like "Star Wars" where a bunch of key moments from characters' past are brought up and cast a shadow on an entire trilogy. The "Star Wars" prequels were relevant because people wanted to know how a little boy with a chip on his shoulder became the most ruthless villain in cinematic history. And we needed to see the duel between Obi-Wan and Anakin. Those were important, but not every franchise works like that, and most prequels have fumbled because they tell stories that don't really need telling.

On a film level, "Minions" is big fun. The mood is set right at the beginning of the movie as the Universal Studios logo fills the screen and the Minions are humming the Universal tune in the goofiest of manners. These are the Minions we have come to know and love, and if you have enjoyed the Minions so far, you may enjoy this film. If you have children that have loved this series so far, and they can't get enough of the Minions, then take them if you haven't already. There is stuff for everybody to enjoy, just know going in that "Minions" plays it very, very safe.

Most of the film is based on stuff we already know. We know the Minions served Gru in the "Despicable Me" movies because without anybody to serve, their lives are meaningless. We learn that they spent several hundred years trying to find a master, the most vile of all time. In the present day, three minions named Stuart, Bob and Kevin (all voiced by Pierre Coffin) go to New York City to find a master to serve for their brothers. They happen across Villain-Con, a massive gathering of the most evil criminals in all the world. There they meet Scarlet Overkill (voiced by Sandra Bullock), who is the most evil villain in the world, and she quickly becomes attached to the minions. Until they fail her, then she becomes the Big Bad of the movie, and the Minions become our unlikely heroes.

What is stale about all of this is the storyline is exactly what I expected it to be. The minions would somehow become heroic and Scarlet Overkill would show her true colors. I didn't really expect this to harsh or hard to follow, as this is a kids movie after all. But the movie definitely suffers from prequel syndrome. The movie doesn't play on lots of different emotions, because how can we feel anything? We already know that Stuart, Bob and Kevin will get out of any conundrum they get into because this is a prequel. Of course the minions will continue down their road to Gru, that is a fact. So why make the movie at all if you are not going to attempt to be surprising or different?

I guess because children's movies don't require it. I think for what its worth, "Minions" is a fun time, and that seemed to be the goal the whole time. It just doesn't pack the emotional punch that the "Despicable Me" movies did. Nor is funny on the scale of those movies either. I was entertained more by the minions in "Despicable Me" than I was the minions in "Minions."