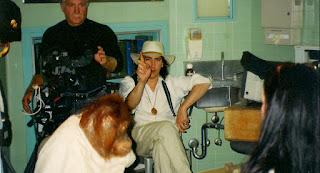 One author I was completely fascinated in grade school was H.G. Wells. I remember getting a huge collection of his books which included "War of the Worlds," "The Invisible Man" and of course, "The Island of Dr. Moreau." For some reason, "Island of Dr. Moreau" really resonated with me. Maybe it was this guy doing dreadful experiments on animals, maybe it was the strange inside the story being told. No matter the reason, I think "The Island of Dr. Moreau" is a brilliant story, and its a story that has been adapted to the big screen a few times. Shocking it is, to learn that nobody has been successful in the screen version of this story.

"Lost Soul: The Doomed Journey" tells the untold story of how Richard Stanley's "Island of Dr. Moreau" became John Frankenheimer's "Island of Dr. Moreau." This is a movie that peaks behind the curtain of movie magic and uncovers the ugly truth of the business. Before trying to adapt the H.G. Wells classic, Richard Stanley was a independent horror film maker, who was really beginning to hit some traction in Hollywood. I had never seen or even heard of "Hardware" or "Dust Devil," but after seeing this movie, I am wildly curious to see what Hollywood saw in Stanley to choose him for "Island of Dr. Moreau." Watching and listening to Stanley discuss the book and his ideas for the adaptation, its clear he was passionate about this, he believed in this movie with every fabric of his being. Things started out well. But then the studios got greedy, and there were creative differences and soon, Stanley got kicked out of his own movie.

I wasn't surprised to learn that Val Kilmer was an asshole to people on set. I wasn't surprised to learn that Marlon Brando was an asshole to people on set. What did surprise me was Stanley had a friend who believed in witchcraft, and Stanley used this friend to persuade the studios to bend to his will. Pretty weird, huh? I was also pretty baffled that shooting took much longer than anybody could have ever thought possible, and there was more partying and boozing than there was shooting, at least it seemed like it. When John Frankenheimer was replaced by Richard Stanley, it didn't seem like he had a real vision for the movie, he just wanted to finish and leave, and that lead to some major set-backs, and his actors began to become the animals they were playing. What also blew my mind was that Richard Stanley snuck back onset and was an extra for much of the movie. "Lost Soul: The Doomed Journey" is one of those documentaries that shows us that non-fiction can be just as strange and just as engaging as fiction.

What "Lost Soul: The Doomed Journey" also shows us is that nothing in life is fair. It shows us that sometimes, Hollywood never has the best intentions and that shows in the final product when we sit down in the darkness of an auditorium. Sometimes the hype and the big names fail us, and we are left with a bad movie. Sometimes we need to trust in the vision of the people we put faith in, and this wonderful documentary shows that. There are a couple of other documentaries that deal in this same territory. Movies about the making of a film that was radically different than the finished product. I liked this look at what could have been, and this will not be the last time I talk about this.