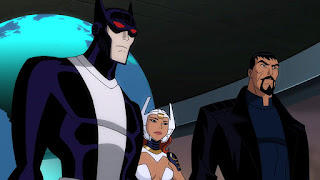 What has made the DC animated movies so impressive is pretty clear. They put their characters first before anything else, and they try to tell a good story with them. That is pretty hard and equally remarkable to do in a span of only an hour and fifteen minutes. But DC Animation is able to create an encyclopedia of emotion in just a short running time. In fact, they have perfected the art of it. If the live action DC Universe can be this good, then they will be able to compete with Marvel no problem.

What is amazing about "Justice League: Gods and Monsters" is that it is a movie that takes chances. Sure, there are characters named Superman, Batman and Wonder Woman, but these are not the characters we are used to. This is not Clark Kent, Bruce Wayne or Diana. Here, we have Hernan Gerrara as Superman; the son of General Zod who was picked up by Mexican immigrants. Kirk Langstrom; whose experiment to defeat cancer had "vampiric" effects. Then there is Bekka; another daughter of gods. In this world, Lex Luthor is a good guy and Amanda Waller is the President of the United States. Bruce Wayne and Clark Kent are nowhere to be found. Together, they are much rougher Justice League, more vicious, more violent and much more dangerous. This splits the world's view of the Justice League as a whole, and when the League is framed for murder, their worst fear is realized.

I love it. I really enjoy that DC is really playing with alternate realities. I love that they are trying to prove that the traditional superheroes are the only characters that can sell or be engaging. If this is a big hit for DC animation, I hope this means we can adaptations of "Superman: Red Sun." Hopefully this will push Marvel to give us an animated version of "Old Man Logan" instead of an inevitably watered-down version we may get in the future. Then maybe, just maybe, Hollywood will start playing with alternate realities in their superhero movies. The sky is the limit and I hope people start seeing the potential in this.

I will say that this is the most violent of any of the DC Animated movies. I am not quite sure this is a movie I would show kids, because even though the movie is animated, the violence is still pretty graphic. Lots is suggested, but its suggested on a level that children will understand what happened, and that could give them nightmares. There is also some pretty rough language in this one. This is not your standard superhero tale, this is much rougher around the edges and parents should be warned about what they are getting into.

But hey, I think "Gods and Monsters" represents progress. Just as superhero movies are raising the bar on the big screen, they are beginning to raise the bar on the small screen too. This can only lead to more possibilities and more risks. A risk can be a reward in disguise and this proves that correct.