When it was announced that  the "Ghostbusters" would be all-female. I was all for it. I didn't mind it at all, not just because I was a livid fan of the movies. I always liked the idea of expanding the universe, and if that meant a team of all-women, then it could work. It seems Paul Fiege is off to a great start casting-wise. Sure, for an all-female "Ghostbusters" reboot, people like Melissa McCarthy and Kristen Wiig are givens. I don't want that to sound like they won't be great, because I think they will be. I honestly don't know much about Kate McKinnon and Leslie Jones, but I am as curious as always. Honestly, who won't buy a ticket to see Chris Hemsworth of all people doing comedic stuff?
If you are not at least pondering a new "Ghostbusters" movie, perhaps the addition of these three will trip your trigger. 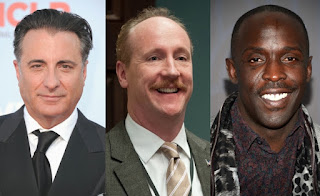 Yep, Andy Garcia, Matt Walsh and Michael K. Williams will be joining the "Ghostbusters" reboot in 2016. You may know Garcia best from the recent "Ocean's Eleven" movies, as well as "Godfather Part III." In the "Ghostbusters" reboot, he will play the mayor of New York. You might remember Walsh in his small but effective role in "The Hangover" and Williams from HBO's "Boardwalk Empire." Very little is known about the characters Walsh and Williams will be playing, but I hope they have some great dialogue to work with, as both are very capable actors.

Even if you think that an All Female "Ghostbusters" is just a reaction to a very PC age, you have to be at least a little excited now. This cast is sizing up to be something exciting, and if the writing and execution is all there, this will be a good reboot.

Here's to hoping that happens.

Posted by Shawn Hoelscher at 8:10 PM