Bad vs. Evil: A look at the SDCC Suicide Squad Panel! 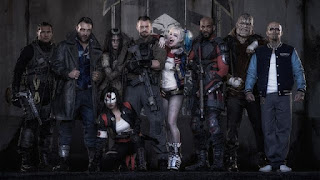 You know what I need to do? I need to start being a little more optimistic.

When the cast for "Suicide Squad" was released several months back, I tore into it pretty well. All over one man, not the entire cast, not half the cast, one man. Look, Will Smith may have an ego bigger than planet Earth, but if he has one thing that I admire, he's dedicated. From what I could tell from the mini-clip of the "Suicide Squad" panel, it seems Will Smith is putting all of his faith into director David Ayer's hands. I like that, I like that a lot. He isn't trying to be the head-hancho, he isn't trying to take all the spoils of war from this production. This is behavior I am not used to when it comes to Will Smith, so that has me hopeful. After this, and the new "Batman vs. Superman" trailer we saw today, it seems Warner Brothers has the supreme chance to really compete with Disney. For somebody who loves both DC and Marvel in equal measure, and just wants to see all of these characters shine, its overwhelming. It's a great time to be a fan of this stuff.

It seems the WB is doing everything they can to do something similar to the Marvel brand, but not entirely copy it. With "Batman vs. Superman," it seems a big theme for that movie will be the world reacting to super-powered people suddenly in existence. Marvel is almost ten movies deep, and it seems the people that inhabit that world are never phased by metahumans walking among them. Seems a little unrealistic doesn't it? With "Suicide Squad," its pretty much going to be the anti-Avengers. In the comics, the "Suicide Squad" is based around of group of DC supervillains, and the government forces the villains to work for them in exchange for shorter sentences. If they flee, they are instantly killed, hence Suicide Squad. Marvel has unleashed its fair share of badasses, but never has a movie really revolved around them, and I love that DC is trying to play cards we haven't seen yet, rather than copying Marvel and hope they can compete. They can compete, simply by being different and I love that they are embracing that.

They couldn't have found a better director to helm this project than David Ayer, that's as good as Marvel nabbing Joss Whedon for The Avengers. And Will Smith promises an insane movie, and all I can say is good.

No footage is up yet, but there are several people covering San Diego Comic-Con this weekend, and from what they saw of the footage, we are in for a treat.

Apparently the "Suicide Squad" trailer is "Creepy and weird all the way through" and will be a " perversion of superhero iconography." Well, that has me all sorts of excited. This report also said some really cool things about Jared Leto's Joker, which definitely sounds like a completely different rendition compared to what Nicholson and Ledger did with the role.

Well, I don't know about the rest of you, but I am ready to plunge into this DC cinematic universe. I know I have been hesitant, but not anymore. That ends tonight, and 2016 can't get here fast enough.

MY SOURCE FOR THIS MATERIAL IS BELOW, PLEASE READ MORE IF YOU WANT MORE INFORMATION: http://www.hitfix.com/motion-captured

Posted by Shawn Hoelscher at 8:21 PM