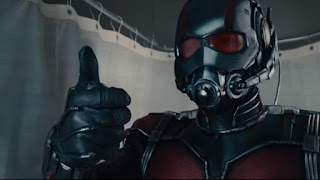 Last year, everybody thought that "Guardians of the Galaxy" would be Marvel's first major failure. Lots of people said the movie itself would be poor, and they also said it would make the least money out the entire franchise. They thought the setting was too weird, the characters were too weird and absolutely nothing would stick afterward. Well, "Guardians of the Galaxy" was a massive achievement for Marvel. The haters were forced to shut up when "Guardians of the Galaxy" made much more than anybody expected, and was actually a brilliant movie all by itself. So of course, once "Guardians" proved its worth, the haters had to attack another upcoming movie in Marvel's stable, and that movie was "Ant-Man."

Look, I'll admit, even I had my doubts about "Ant-Man." The ability to shrink your size and the ability to control the minds of ants doesn't seem like an intimidating set of superpowers. There were reports that Edgar Wright sat on an "Ant-Man" script for about eight years before finally committing to Marvel. Then a dispute with the studio saw Wright walk off the project, along with three actors. This was roughly a year before release, and Marvel scrambled to get a new director while keeping the original release date. A huge gamble for any studio. But director Peyton Reed was passionate about the project, and everything else was ready to go. The only question was could the film be pulled off, and would Marvel have another hit.

I really don't care how much money "Ant-Man" makes, because box office earnings have never been an indicator of whether or not a movie will be good. Just because a movie makes a lot of money doesn't mean its going to be great, I mean just look at the "Transformers" franchise as whole. "Ant-Man" as storytelling, is another hit for Marvel. Its better than I ever expected it to be and not at all like I imagined. Considering "Ant-Man" is about a superhero that shrinks, the action sequences are some of the most wild action Marvel has ever filmed. The entire cast pours themselves into this project with their hearts wide open. Most of all, Marvel has proven that once again that they can make any of their characters work onscreen, even the most obscure ones, just as long as they find a cast and crew that is just as passionate about those characters as they are. Heck, I can see Marvel making a "Squirrel Girl" movie awesome.

The film begins in 1989, and the first truly eye-opening special effect is at work. Michael Douglas plays Hank Pym, a brilliant scientist and S.H.I.E.L.D. agent circa 1989, who quickly resigns after the agency wants to use his special Pym Particles on a massive scale. Pym believes that nobody should use his incredible shrinking particles as he finds them way too dangerous. He resigns, despite Howard Stark's (John Slattery) pleas not to, taking his beloved particles with him. The de-aging work done on Michael Douglas in this scene is a marvel unto itself. You won't be able to fathom that Douglas played a young and old version of himself here.

In the present day, we see an older Pym, who created a successful technology company after S.H.I.E.L.D. but its all about to be taken over by his protégé Darren Cross (Corey Stoll). Even Pym's estranged daughter Hope (Evangeline Lilly) has voted  him out of his company. Cross has discovered Pym's secret in giving suits shrinking powers, and he plans to sell the suits to highest bidder. Pym knows how dangerous that could be in the wrong hands, so he finds a down-and-out thief named Scott Lang (Paul Rudd), trains him with his own particle suit and has him steal the suits Cross has been developing. Lang is fresh out of prison and he wants to start making a difference in the life his daughter. His wife (Judy Greer) has moved on with a cop (Bobby Cannavale) and she doesn't think he ever amount to anything.

What makes "Ant-Man" so clever is how the action is staged. Reed is wildly creative in how he uses the shrinking suit for some very big action set pieces. There is showdown inside of a briefcase that I think I'll watch about fifteen times on blu-ray. There is a lot of humor in this movie, but that was to be expected. This is a movie with Paul Rudd, Bobby Canavale, Judy Greer, and Michael Pena in it, of course it was going to be funny. The humor in the movie is never forced like it was in "Avengers: Age of Ultron," it is a very natural, organic experience. People have been complaining that Marvel is little too light on its storytelling, but honestly "Ant-Man" would not have worked as a serious, darker movie. Peyton Reed strikes just the right tone of being funny without overdoing it, creating awesome action and giving us enough of an opportunity to care about all the characters.

The entire cast is solid across the board. Paul Rudd will make you believe he is a superhero. Douglas is outstanding throughout, as is Lilly. Michael Pena, who plays Lang's best friend, is really funny throughout. Marvel has made it a habit to let us down with their villains, and I think Corey Stoll finally delivered a villain that was actually good to watch. I don't think Cross is on par with Loki, but Stoll makes us believe in his need for success, his callous and his insanity. It is a very strong villainous performance.