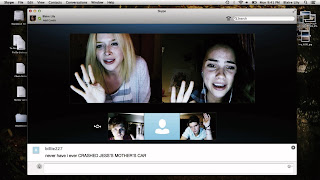 "Unfriended" is the found footage genre taken to the extreme.

I suppose, in a way, the game presented in "Unfriended" is the next step in the road down found footage. Having a movie completely made up of Skype, Facebook, Instagram and other forms of digital discussion with a microphone and computer camera. In a way, "Unfriended" is clever in the way it tries to tell its story, using the most modern of technology to tell a urban legend of the 21st Century. The thing is, the story is so cliché that I felt it wasn't worth telling, and it is filled with characters we couldn't care less about.

Here is one big problem with the found footage movie, they are almost always filled to the brim with people we can't connect with. What is the point of watching any movie if you can't connect to any of the characters? When a group of friends are being stalked by a supernatural force, they spend most of the movie bickering with one another, calling each other names, and almost partaking in a competition to see who can be the most offensive. One might say that, just as the 1980's slasher films were about teens being killed as a stance against underage sex, that maybe this movie places its stance against cyberbullying. Here is the thing though, I cared about the characters in those 1980's slasher films. If I didn't like them, I cheered against them. None of the characters in "Unfriended" I cared much about, nor did I like to cheer against them. This is the most unrighteous, bland group of characters to ever inhabit a movie like this.

What can I really say about these actors who play these characters? Not really much at all. That has always been the tough thing of found footage, you get a group of young actors to play types, not actual characters. These are all self-indulgent, oversexed, high school dipshits who deserve everything that happens to them over the course of an hour-and-a-half, and it makes it really hard to identify and emphasize with someone who you'd find repulsive after getting to know for five minutes. I don't get why young actors choose to star in movies like this, because it seems like the perfect way to put a dead-end on your career. Plus, how this evil spirit comes to haunt them is very unimaginative, and even hilarious at times. When the ghost got her ex-friends to play a twisted version of Never Have I Ever, I couldn't help but break out in obnoxious laughter. What was anybody thinking when they sat down to make this?

I really don't have much else to say. I don't have the energy to rail against this movie. It's not good enough to be mediocre and it is certainly not good enough to be good. You know there is something wrong with a movie when I can't passionately discuss why it may or may not work for me. I especially hate movies when I have such a nonexistent reaction to them, and "Unfriended" positively reeks of that. Sure, its clever in its set-up and its as slick as slick gets as far onscreen mechanics, I have no feeling from anything else in it. This is a movie that left me cold. I don't have an urge to like or dislike it, and I have no words to tell you why. This is definitely a terrible, terrible experience. Go, and you might be the one who becomes unfriended, because nobody will want to hang out with such a sourpuss.