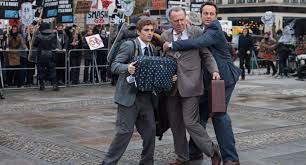 "Unfinished Business" is a weird movie.

I don't mean in an artistic sense. I don't mean in any sort of way that elevates the material. It is just weird in a stand-off, unwelcoming way. Its a movie that wants to be funny, its a movie that wants to be rude, and at the same time, it wants to be all fuzzy and heartwarming. Those ideas have never gone hand-in-hand in the movie world. There have been several great comedies that have had a deep, endearing message underneath all of the laughter. What made those particular comedies so great was that it earned every laugh while also earning the message. "Unfinished Business" doesn't do that, and it fails at being both a wholesome movie about family, and a raunchy comedy.

The film opens with Dan (Vince Vaughn) fighting with his Boss, Chuck (Sienna Miller) over a business deal. Chuck is the manager of Dynamic Systems, but we are never really told exactly what it is Dynamic Systems does. We just know that Chuck is giving Dan 5% less commission on a business deal he just took care of. Now Dan wants to start his own business, because he eventually wants to send his bullied kids to private school. Two co-workers follow him into this independent business, Tim (Tom Wilkinson) and Mike (Dave Franco). A year later, the business hasn't really done much, but they finally get a call from investors who invite them to a business trip in Germany. It also just happens that Chuck is there competing for the investors money.

Why does the trip require the group to be in Germany? Because it gives Dan's character a ticking clock, an amount of time before he has to get his children ready for private school. Why is Chuck purposefully in competition  against the trio? So that the film has a bad guy. As far as movies go, this is about as ordinary as ordinary gets. This is about as familiar as familiar gets. The biggest letdown is most of the movie isn't very funny. Dave Franco is very good at portraying an asshole, he is kind of known for it. Here, he is the awkward, Michael Cera type. While he lands some of his material, most of it falls flat. Had Cera himself played the role of Mike, perhaps the movie would have been a lot better. But for most of the film, it seems like Dave is just trying too hard. Then there is Tom Wilkinson, an actor I have admired for a long time. Wilkinson is known for his dramatic stuff, it is what we come to expect from him. I love it when actors try something new, I love it when they break their comfort zone, and I especially love it when they try to get out of their typecast persona. But if you are going give Wilkinson a goofy character, give that character something to do. Wilkinson is the typical old pervert, who really doesn't add much to the team aside from an aspiring speech in the middle of the movie. He's a big cliché, and Wilkinson deserves better.

You're all probably wondering how Vince Vaughn is in this, as he is the lead character. He's fine, I guess. Vaughn has become one of those comedic actors who feels like he's playing the same character every time. I am not saying that is particularly bad, its just tough to gauge him as a performer. If you have liked Vaughn in the past, you will probably like him here. If you are not particularly a fan of Vaughn, you'll probably not like him here. He doesn't bring anything new or fresh to the table here, so that is odd.

The biggest thing that didn't work for me is kind of what I alluded to above. We get the idea that Dan is a hard-working, family man. He wants to create a better life for his family at any cost. While that's a great message, it is played up in volumes in this movie. I must also say that this movie is full of raunchy jokes, lots of nudity and the worst of the worst language. The movie doesn't transition well at all with its ideas, making for a very weird movie. Imagine if both "Forest Gump" and "Schindler's List" were not only uplifting movies about courage and in the latter case, survival, but also were gross-out comedies? They wouldn't be the same movies would they? "Unfinished Business" tries so hard to be both that nothing about it makes sense.

I didn't get much out of "Unfinished Business," which is why I found it so frustrating.