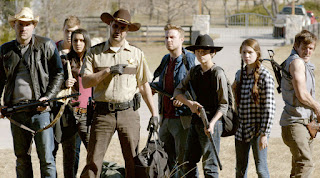 It was bound to happen at some point.

The zombie bubble of popularity fluctuates like nobody's business. George A. Romero brought the genre to roaring life (literally) and it slowly became popular, then that popularity went down a few notches. The want and desire for the zombie genre has been going up and down ever since. Right now, we are living in a time of loving this genre. So it is only natural that a movie would appear that attempts to rip the genre apart?

If you've been following with what is most popular in the genre right now, you can probably guess how "The Walking Deceased" goes along. Yes, its pretty clear that the biggest inspiration of parody comes from "The Walking Dead." You see it in the title, and three of the characters are based off of Rick, Carl and Daryl. In fact, the boy with the sheriff hat is constantly called Carl even though his name is Chris. There is even an elderly couple who come off as evil but are actually really nice, kind of like Herschel Greene. But there are other references in the movie too. There is a zombie trying to win the love of a human (Warm Bodies), there survivors named after the cities they are from (Zombieland), the group sets up shelter in a mall (Dawn of the Dead) and there is also a character that has a sort of "Resident Evil/Book of Eli" thing going on. There are also references that I probably didn't catch. Sometimes, it gets really exhausting trying to keep up with all of them.

"The Walking Deceased" isn't the type of parody that tries to make the audience laugh, its the type of parody that remakes certain scenes or certain scenarios we remember from popular culture, then tosses a throwaway joke just to make sure we label the film as a comedy. The "Chris' name is Carl" joke overstayed its welcome. The goofy one-liners never once landed. I am sitting here trying to remember a time in this movie when I actually laughed or when I actually cracked a smile, and I can't remember at all. There was a time when parodies were smart about their humor. When they approached the humor of something in a big and even sometimes, epic way. The filmmakers knew what they were making fun of, and they soaked it up before they began to make the parody. Nowadays, everything is so safe, so manufactured, so completely devoid of effort that it makes me cry.

I get it. This was a direct-to-video movie made on a nothing budget that just so happened to hit Netflix. The thing is, I don't know if there is really anybody out there that finds any of this remotely funny. It feels as if the filmmakers knew this was going to be effortless, but they went and made it anyway. Its hard for me to really put a grade on a movie like this. Since this feels like a movie that tries to be trashy fun. The thing is, there is absolutely nothing memorable about the movie. Even  the "bad" isn't memorable. This is just a waste of time, and I am not sure how audiences are supposed to feel about this as a whole.