For the third time in this new millennium, we have an actor playing Spiderman. This time, Spiderman will show up in the Marvel Cinematic Universe, so he will be interacting with RDJ's Iron Man, Chris Evans' Captain America and the like.

Our new Spiderman is... 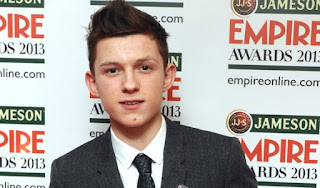 Some probably don't know who this is, and if you don't, check out "The Impossible" from a couple of years ago. The movie featured Ewan McGregor and Naomi Watts, and it was about a family surviving a tsunami. Holland was great in it, and even though he is a young actor, he is ripe with potential.

I have already heard the outcry for a relatively young actor to play Spiderman. I think those people have either never seen a Spiderman movie, or were not paying too much attention to the Tobey McGuire or Andrew Garfield movies. In the comic books, Peter Parker got his superpowers when he was in high school, that's right high school. Both film versions got that aspect of the character history right, it just didn't look or feel right because both Tobey and Andrew were in the mid-twenties when they made their respected movies. Several movies throughout history feature twenty-something's playing high school students, and it just looks off. Holland maybe 19, but he looks like a high school student, and he is at least around the age of a high school student. This will give the movie a piece of authenticity it has never had before. Hey, I was not the biggest fan of the "Karate Kid" remake in 2010, but one thing that movie got right was that "the kid" was a kid. Holland is a great actor who actually looks the part. So lets keep this in mind moving forward.

I also think that Marvel has made enough good decisions that I will trust them with their decision making from here on out. They have cast all of their characters perfectly, lead characters, supporting characters, cameo work...doesn't matter. It is all as close to perfect as they could possibly achieve. Marvel and Sony saw something special in Holland, or they would have never given him the part. They considered several actors, both studios fought over who should don the red and blue spider-suit. This was a tough decision, because the decision matters. Spiderman is one of the most popular heroes of the Marvel stable, both studios knew they had to get it right. I don't know about you guys, but at this point, I trust Marvel. I think we are in for another good time.

What say the rest of you on this casting?