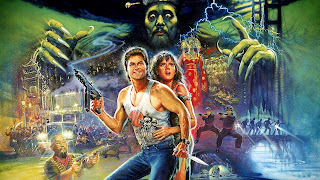 It has recently come to my attention that "Big Trouble in Little China" is getting the remake treatment. I've been thinking about this for a good week now and I can't figure out why such a remake is needed. I get movies get remade because studios see dollar signs in classic movies, and they think they draw in the old audience to see if it holds up and a newer audience will lure people in who are curious about it. Still, turning classic movies into cash grabs sickens my stomach, especially when films like "Big Trouble in Little China" got it so right the first time. Plus, "Big Trouble in Little China" is more of a cult classic than anything else, isn't this a little obscure even for Hollywood to revive? I suppose southern California has officially run out of ideas. Its too bad, I'd be much more interested in Hollywood taking bad films with interesting ideas and remaking them, instead of going for the easy money, but I doubt they think that way.

"Big Trouble in Little China" is a huge thrill ride. Its got martial arts for those fans, it has magic for those fans. There is a tinge of romance and goofy one-liners. There are crazy bad guys with even crazier fights. There are even monsters who show up here and there. For a big fun, 1980's action-fantasy, it had a little of everything. When I say everything, I mean everything. We had Kurt Russell in easily one of his best performances, something that leaves a high watermark in his entire career. He had Kim Cattrall before she became famous for "Sex In The City." No matter how you look at it, "Big Trouble in Little China" had a little of everything for any type of fan of action cinema.

"Big Trouble in Little China" had a spellbinding hook. As the film opens, it draws you in. I remember watching this movie for the first time when I was in grade school and as the opening ten minutes play out, the overwhelming feeling of this movie being apart of my life from this point forward was evident. In that opening scene, we meet Egg Shen (Victor Wong), a magician and somebody who presents a monologue, explaining what we are about to get into. He is at a police station and he is trying to explain the story we are about to witness. I love how there is emphasis on magic being real, as its something that is all but missing in today's fantasy movie. There is such a massive obsession to put a realistic spin on everything fantasy, instead of trusting the premise and allowing for the audience to embrace it. I mean, imagine a realistic Harry Potter franchise, doesn't sound quite as fun to me.

Kurt Russell plays Jack Burton, who is pretty much a walking action movie cliché. He has a certain style and mannerism that we saw in old 1980's action movies. Burton is off to meet his best friend in New York City, a restaurant owner named Wang Chi (Dennis Dun). Together, they go to pick up Wang Chi's fiancée when she is suddenly kidnapped by a powerful Chinese street gang. The duo plans to rescue her, which tangles them in ancient Chinese magic and sets them up to face off against Lo Pan (James Hong) a powerful sorcerer who has plans for Wang's fiancée. The work by James Hong is the reason to see this as soon as possible. He's going to be a villain that you love to root against and I can't believe he is not more relevant in popular culture.

"Big Trouble in Little China" may have some familiar action movie clichés, but it is a very different animal compared to the rest of the herd. Honestly, I don't know if it was an accident or not. This is a movie where the hero is not a hero, and the sidekick saves the day. It is a movie you'd never expect, and it is fun how the movie plays with expectations, while also shattering them in the process. This is something we'd never see in action movies ever today, and when Hollywood took another stab at it, it failed (Green Hornet). "Big Trouble in Little China" is something special, its special in several different ways.

I have very little hope for the remake, but at least I'll always have this one to watch over and over again.