The Batman directed by Ben Affleck 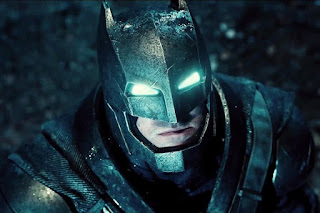 So its been known for awhile now that Ben Affleck will play Batman for the DCCU. I may not have jumped for joy when this news came out, but I was curious. I wondered what Warner Bros. saw in Affleck to force them to want to pick him. Its pretty clear now that Affleck will be around for a lot more than just "Dawn of Justice." It sounds like he will appear in "Suicide Squad" and he will definitely appear in the one-two punch of "Justice League." A long time ago, there was a rumor that sometime after "Justice League," Ben Affleck would get his own solo film. That film would be called "The Batman" and it would come out sometime around 2019.

Well, that rumor has resurfaced and it seems that not only will Ben Affleck star as the Caped Crusader, but he will possibly direct the film too. I guess now the film is possibly slated for sometime in 2018, which will be in between the two "Justice League" films.

It will be interesting to see if this all turns out true, and whether or not Affleck will direct. I have loved Affleck's directing career much more than his acting career as a whole. But I feel his directing has somehow improved his acting. The decisions he's been making as an actor the last five years have been good, by and large. I think more people are, little by little, beginning to take him seriously as an artist. At the end of the day, I want to like a movie than panning it, so if Affleck can make a big-budget, awesome Batman movie, I'd be all for it. It would be the first time Affleck tackled something of this scale (Still wish we got the Affleck directed, and Affleck written "The Stand" adaptation!), and I am curious to see if he could pull it off.