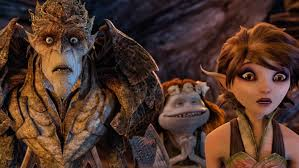 George Lucas, how hast thou forsaken us?

There was a time before "Star Wars" and "American Graffiti" when George Lucas was just another indie filmmaker. Nobody in the year of 1977 would have ever thought that "Star Wars" was going to be the cultural phenomenon that it is. There was actually a time when Lucas himself thought it would fail. The thing is that it didn't fail, far from it, and now Lucas is engraved himself as apart of our pop culture canon. He has said several times that he wants to go back to making smaller, more independent fair. He desires to step away from the big corporate, commercial machine. But I have a feeling, at  this point, George Lucas can't really go back.

While George Lucas didn't direct this movie, it was pretty clear in the marketing campaign that this was a George Lucas vehicle. Which if you actually watch "Strange Magic," it definitely feels like a George Lucas vehicle, with absolutely no redeeming qualities. This is a movie that recently hit DVD, and I missed it in theaters. I really wonder what the theater crowd thought of this, I wonder if families clamored to it. I wonder what anybody got out of it. Because I feel like it couldn't have been much. "Strange Magic" is the oddest family film I have seen in quite a while. Not just in context but in execution. Taking from surface view, "Strange Magic" is basically a new riff on William Shakespeare's "A Midsummer Night's Dream," but it takes place completely in a fantasy world and features a "Beauty and the Beast" type metaphor at the end. That is all without mentioning when characters randomly break out into popular song.

Yes, the characters in this movie begin singing songs so recognizable that it will leave you puzzled.

You maybe asking if I liked "Moulin Rouge!" and the answer is yes. I get intoxicated with love every single time I watch "Moulin Rouge!" The big difference between "Moulin Rouge!" and "Strange Magic" is the former was much more confident with its execution. "Moulin Rouge!" wants to feel like the wildest dream you've ever had. But at the same time, it chose popular songs that resonated the themes, and emotions of the characters singing those songs, just like any great musical does. "Strange Magic" wants to do that, but falls short in its execution. Lucas' trademark cuteness is on overdrive in this movie. That may work for the kids, but the characters who populate "Strange Magic" have a lot more in common with Jar Jar Binks than they do with Luke Skywalker and therein lies the problem. With no feeling towards the characters, these songs feel forced and out-of-place. It also doesn't help that they are sung horribly.

When characters aren't singing Elvis or Lady Gaga, we focus on the Bog King (Alan Cumming), ruler of the Dark Forest who bans the use of prim roses to make love potions. On the good side of this fantasy world lives Marianne (Evan Rachel Wood) a royal fairy who is about to be married Roland (Sam Palladio), who only wants Marianne for her royal army. Once Marianne discovers Roland is cheating on her, she feels as if she can never love again. So Roland makes a deal with a elf named Sunny (Elijah Kelley) to rescue the Sugar Plum Fairy (Kristen Chenoweth) so she can manufacture a love potion to force Marianne to fall in love with Roland. If you know your Shakespeare, then you know this goes an entirely different direction.

Its an odd story to get from point A to point B, but I can see why they went for it. The idea of "beauty is in the eye of the beholder" is a wonderful life lesson, but "Beauty and The Beast" did it much better, with much better songs I might add. For the culture we live in, this should be an idea that we should be treating our younger generations to, but this is not the movie I'd use to make the point. "Strange Magic" is way too strange, and I am sure young ones will be wrestling with trying to understand the motivations of the characters in the first half hour, or maybe they'll be having too much fun singing along with all the characters to really notice. Again, the use and execution of the recognizable songs is just disappointing and blasphemous.

I'll say this though, the animation is breath-taking. I think the Lucas ranch can turn anything visual into a fever dream. I just wish all of this rich animation went toward something worthwhile. "Strange Magic" seems to be already forgotten and it will be that one family film we have trouble remembering by the time the year ends.