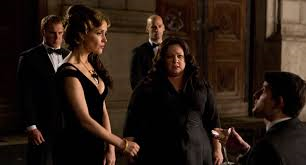 While I really enjoy Melissa McCarthy, I detest to an extreme how she is treated in Hollywood.

For the most part, even beginning as far back as "Bridesmaids," Hollywood has treated McCarthy like she is the female Zack Galifianakis. She is always the weird person who acts the weirdest and says the strangest stuff, and its all funny because of McCarthy's appearance. She is also the butt end of every "fatty fall down" joke, which seems to come in a surplus for movies starring McCarthy. Not only is it annoying that nobody seems to know how to use the fine talent McCarthy clearly possesses. But it also has to be ridiculing to only add up to so little.

Well it seems Paul Feig doesn't have that problem. He knows exactly how to use McCarthy's talent and he zeroes in on it like a ballpoint laser in the hilarious "Spy." It is also pretty remarkable that McCarthy isn't the only great thing about the movie. But hey, more on that later. Something like "Spy" is refreshing because we are seeing McCarthy play a human being, not some weird loser you would never give the time of day to if they walked up to you on the street. McCarthy's Susan Cooper comes off as your everyday desk jockey for the CIA and it comes off believable that she would use state-of-the-art technology and a hidden earpiece when assisting field agent Bradley Fine (Jude Law), someone whom she also has a crush on. This feels like somebody real and there is an uncanny authenticity to McCarthy's performance. Sure, she has some funny scenes and she has some pretty outrageous dialogue as the film presses on. There are moments of classic McCarthy, but they don't overwhelm the movie. Finally, somebody gets her.

When Agent Fine is brought to harm, Cooper is up for some revenge and she volunteers to go undercover to weed out Raina (Rose Byrne), an international criminal who put Fine in harms way. Even though Cooper has had limited field training, she is awarded the gig and she shadows Agent Rick Ford (Jason Statham) during her investigation and they both uncover a terrorist attack involving Raina. I continue to love Byrne's plunge into comedy and she really has got the "Evil Bitch" character down pat and she plays that character well. I never once thought Jason Statham and slapstick would ever go together, but he has officially proven me wrong here. Jason Statham continues his badass persona while also getting the audience to snicker at him during some scenes. It's material I'd never guess he'd be able to pull off and Statham proves just how much range as an actor he has.

This cast is off-the-charts great. Not only do we get the McCarthy performance we deserve. Not only do we get great material from both Byrne and Statham. We also get another wonderful performance by Jude Law. I love how his character plays with normal expectations, then completely crumbles those expectations in the best way possible. I also have to single out the work done by Miranda Hart. Hart plays Nancy, Cooper's best friend in The Agency and a techie like her. Some of the funniest and best overall material in the film is between McCarthy and Hart, together they nearly steal the show. There is also great work done by Bobby Cannavale, Allison Janney, Morena Braccarin, Peter Serafinowicz and even 50 Cent.

I love that the opening titles features a James Bond style credits sequence. I actually may go as far to say that it could compete even with a couple of them. The action sequences in this film are surprisingly efficient. I was expecting for the fight scenes to have a comedic, fun zing to them. When it actuality, they are all pretty badass. I never would have thought to put Melissa McCarthy in the same sentence as badass, but right now I do so with pride. Melissa McCarthy is refreshingly badass in her action scenes.

In a month where "Jurassic World," "Entourage," "Insidious Chapter 3"and a huge host of other well-known franchises hit the big screen, it can hard sometimes to remember what else is out there. "Spy" was refreshing because it has no ties to any franchises, even though it pays homage to a few. Its a movie that finally figured out how to use Melissa McCarthy. Plus, as the summer really starts to get going, its just a good time at theater. I can't seem to figure out a reason to argue against that.