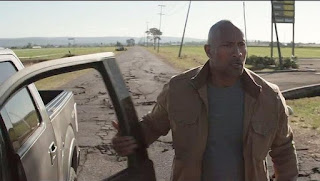 The disaster movie has taken on an incredibly recognizable template, one that hasn't been shattered in many, many years. Each of these movies features a male hero, who has recently become divorced, or the hero is a single parent. The hero's child will be detached somehow, and if the spouse is in the picture of this movie, her new husband will be a rich asshole. There will be a mostly unneeded subplot involving a seemingly crazy scientist who everybody doesn't believe, but he will turn out to be correct every time. Through the film's disaster, the hero will reunite with their family, the child will learn a newfound responsibility and brevity. The rich asshole? He will most likely die or go back to the whole in which he came by the film's big finish. We will feat our eyes on an onslaught of special effects in order to get to the end.

Have I not described every disaster movie out there? Think "The Day After Tomorrow." Think "2012." Think "Volcano" and "Dante's Peak." What all of  those movies have in common is that they are essentially the same movie. What is it about disaster movies and bringing broken families back together? Does Hollywood think the audience will notice that the "disaster movie" will parallel the "disaster household?" I am sure several audiences get it every time. Is it the only way convey the films metaphors and themes? Is it the only way for Hollywood to really get these disaster movies going creatively? I don't know, I just figured somebody would have created a new avenue to explore the disaster movie.

Sadly, that movie isn't "San Andreas." But that may not be a bad thing.

The hero of this movie is Ray (Dwayne "The Rock" Johnson) a search-and-rescue helicopter pilot who has recently been sent divorce papers by his ex-wife Emma (Carla Gugino). Emma is moving in with her soon-to-be new husband Daniel (Ioan Gruffud) and Emma and Ray's daughter Blake (Alexandra Daddario) will live with Daniel too. Ray is somebody who is dedicated to his job, and he is a hotshot when it comes to rescuing people, and he also seems like a good person in general. There is a dark spot in both Ray and Emma's past, something they couldn't get over, which is the reason for the divorce. Just as all of this is about to reach a climax, the world is turned upside down when the San Andreas fault triggers an magnitude nine earthquake. This is something noticed by Dr. Lawrence Hayes (Paul Giamatti), who spends the entire movie making sure everybody leaves southern California or get somewhere safe. That isn't an option for Ray and Emma, together they go to rescue Blake after Daniel abandons her, because, you know, he's an asshole.

Didn't expect Ray and Emma to team up? Well in the middle of the earthquake carnage, Ray miraculously finds Emma and saves her life. Pretty convenient isn't it? Welcome to the world of disaster movies. Story and character decisions are made out of plot convenience over anything else. That is something that has become common ground for disaster movies, and "San Andreas" is no different. Sure, Paul Giamatti doesn't spend the entire movie running around, telling the world I told you so, everybody seems to believe him from the start. But that is basically the only thing in this movie that isn't a cliché. Ray conveniently finds Emma in the wreckage, Ray and Emma conveniently lose their helicopter at a crucial moment, they conveniently find somebody who worked at an aviation base. The list goes on and on, but you get the point. There is no point in this movie where risk was ever in option during the entire production. "San Andreas" is a very silly movie, but since its a disaster movie, were we expecting anything different?

"San Andreas" is what it is, and it does well with the story it tells. The visuals are, as expected, amazing and I think people will be blown away by the scenes of destruction. The Rock, Carla Gugino, Alexandra Daddario, Paul Giamatti, they all do what they were asked to do, and they do it well. I don't think having an entire A-List group of actors in these movies make them necessarily better than a typical, National Geographic mini-series, but the cast does well with their material. But in the fashion of dumb summer fun, I think "San Andreas" completes what it sets out to do, and it wraps everything up in a big bundle of obvious.