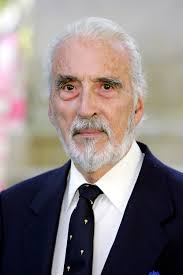 For several modern film geeks, when someone mentions Christopher Lee's name, they immediately think any movie pertaining to Middle Earth. I can completely understand why, part of the reason why those movies work so well is because they were universally perfectly casted. In Christopher Lee's case, its absolutely no different. Even if someone isn't a "Lord of the Rings" or "The Hobbit" fan, maybe "Star Wars" is more your cup of tea. Perhaps you remember Christopher Lee from the prequels. Perhaps you remember a particular Sith Lord going toe-to-toe with a particular little, green, Jedi. But Christopher Lee had worked in the movie business for a very long time before his passing. He was one of those go-to actors when it came to villain roles. He had one of those iconic voices that was tailor-made for an actor who specialized in villainy.

I mean, let's take Saruman and Count Dooku out the equation for the moment. Beginning in 1958, Lee was one of the many actors who portrayed Count Dracula, He played the popular vampire from the late 1950's up until 1972. It seemed that when Lee wasn't playing Count Dracula, he was playing Dr. Fu Manchu in a string of Fu Manchu franchise films. When Roger Moore took his run as James Bond, Lee appeared as Francisco Scaramanga in "The Man With The Golden Gun." In the easy my favorite Christopher Lee movie, and one of the most important films of his career, Lee shine brightly as Lord Summersile in "The Wicker Man." "The Wicker Man" is one of those horror movies that is more mood and atmosphere over anything else and Lee made sure you felt every bit of it. If you haven't had the chance to experience "The Wicker Man," not only will the movie not disappoint you, but neither will Christopher Lee.

Not only was Christopher Lee a talented actor, but he has several voice acting accolades to his name. In his later years, Christopher Lee collaborated with director Tim Burton on several occasions. Lee provided voice acting for films such as "Corpse Bride" and "Alice In Wonderland." Lee even appeared in some of Burton's live-action fair such as "Charlie and the Chocolate Factory" and "Dark Shadows." All leaving a brilliantly unique signature on all of his roles.

The world of acting lost one of its best bad guys. But what is great is Lee's legacy. It seems if one wanted to roam through Lee's filmography, it would take them years to get through it all. That is how deep his filmography goes. Lee was one of a kind, and he will be missed.