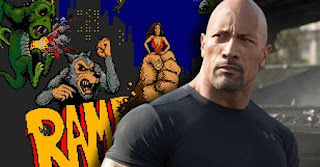 There was a video game I played on my old Nintendeo 64 called "Rampage: World Tour." You got play as a George; who was a King Kong-like gorilla, Lizzie; a Godzilla-like lizard or Ralph massive werewolf. The object of the game was to destroy every city you visited across the world. This wasn't the first game in the "Rampage" series. This is a game that has been around for years, when you needed a fistful of quarters to play your favorite video games. This idea is ripe for a disaster movie, it just never happened. Until now.

Yep, "Rampage" is being developed into a movie. It is going to star The Rock, who will play some kind of human who is trying to save the world from the three monsters. So basically, swap out his character from "San Andreas," drop him in this movie and we are pretty much ready to go. The Rock has been a go-to guy as of late. He has some kind of role in the budding DC Cinematic Universe. He is linked to the "Big Trouble in Little China" remake. He is quite busy, but I like it. I am glad he is doing more action and no more of those silly family films that nobody ever seemed to like. Sure, it sounds like The Rock will be playing the exact same character he played in "San Andreas." But if the movie keeps the fun, laid-back, silly style of the video game, this could be a whole different movie.

So far, "Non-Stop" writer Ryan Engle is penning the script for this. There is nobody attached to direct and nobody else attached to star. Definitely more on this story as it develops.

Until then, here is a little taste of what to expect:

Posted by Shawn Hoelscher at 8:08 PM