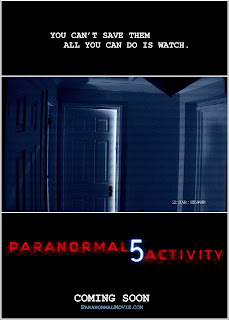 "Paranormal Activity" was not the first found-footage movie ever made. But I felt it broadened the landscape of what could be done with the sub-genre. After the wild success of "The Blair Witch Project," everybody wanted a slice of that profit. They did whatever they could to replicate it, and most failed. "Paranormal Activity" brought some much needed maturity to a failing subgenre. Not only that, but it became a great series of films, that's right films. Taken as a whole, I have enjoyed the Paranormal series, they are pretty smart about their horror, and they are trying to expand a storyline over the coarse of the film. They are not just making more of the same each year to make the big bucks. I will say that they have kind been at a stand-still with their mythology, and I hope they start bringing closure to some of the series' big questions and we really start developing some understanding of this story.

We finally have a trailer for "Paranormal Activity: Ghost Dimension" the fifth film in the franchise. I am a little uneasy about it. What has made this series so popular is the use of so little. This series has prided itself on "less is more," and from the looks of this trailer, it seems they are beginning to sell-out. This will easily be the most CGI-driven movie, and that's sad. This trailer just looks like every other movie with ghosts and I was hoping for some more of the same from this series. I hope that doesn't tangle up the storytelling one bit, and I guess as long as they start tying up some of these loose ends, I will be happy.

What do you think of this trailer?


Posted by Shawn Hoelscher at 7:30 PM