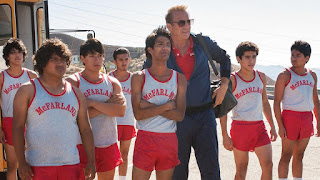 Now that I think about it, I find it funny that I've seen both "McFarland USA" and "San Andreas" in the same week.

Yesterday after viewing "San Andreas," I wrote that while I thought the visuals and performances were very good, it totally boiled down to a silly disaster movie. Not saying that it is good or bad, but that is the movie you are buying a ticket for when you go to see "San Andreas." If you are expecting Award worthy material, you aren't going to get it (well, maybe in the visual categories.). The reason I gave "San Andreas" a lower grade was because I felt it relied a little too much on convenience in order to get to the end. Had the movie stayed true to its "dumb summer fun" nature, I think I would have respected the film a lot more.

This is funny because I think sports movies follow a very similar template to disaster movies. Pretty much every sports movie is the exact same, they are inspirational fluff. The sports movie revolves around a down-and-out coach who lands a job at a sports team is distress. The coach is very inspirational, but the team is a rag-tag group of independent people, and they need help gelling as a team. Even though the team loses their first big game, the coach spouts some meaningful jargon, and before we know it, the team is up and running. Now, before the movie ends, there will be a conflict pertaining to one of the teammates or the coach or both, and that may lead to a tease of shattering the team. I say tease because obviously it doesn't happen, the team comes back together and perceivers. Winning whatever title they set out to win, and we learn some fun facts on the real people right before the credits.

Have I not just explained every sports movie known to man?

The answer is no, there are some sports movies that try to break the mold (see "Friday Night Lights."), but most sports movies stick to the plan. "McFarland USA" is a movie that sticks to the plan. When Jim White (Kevin Costner) arrives in McFarland in California's Central Valley, its because he has no choice. He blew his chance at coaching football at another high school, and he now takes to a poorer town because that is his only option. The Central Valley is predominately Latino, which forces Jim White to stick out like a sore thumb. After White discovers his students and their impeccable running ability, he asks his principle to create McFarland High School's first ever cross country team.

Now this movie appealed to me more than most sports movies. You see, I did run cross country. I was a varsity letterman for four years at my high school, an honor I am very proud of. I haven't ran competitively in years, but I still have the runner's sting. So yeah, I am the target audience here. I love that we have a movie that really explores the art of cross country running. Several people I know think cross country is just going out and running, but there is much more to it than that. It's knowing your pace. Its knowing your speed and how to use it in a race. It's a team sport, and how your teammates place is very important to winning the meet. Yes, there is an art to cross country, and I can tell you that there are several moments in this film that are completely authentic.

The movie also flirts with the idea of a white coach leading a latino team, being involved in a poorer community, when all he wants to do is go after the big dream. Many teams that McFarland faces in the movie write off our heroes, due to white privilege and other ignorant biases. While the movie touches on those ideas slightly, it never fully explores them, which I wish the movie did. I can tell the movie really wants to be a deep movie, especially with its cliché of an ending, but it never allows itself to fully flourish.

The rest of the film is a typical sports movie. White struggles to get his team going, they lose their first race, White gets it together, the team gets it together, and while there is a slight struggle, the movie ends on a glorifying high note. You may think I spoiled the movie for you, but only if you have never seen a single sports movie in your life. "McFarland USA" doesn't break away from the usual sports movie norms, but there were some moments in the film I didn't think would play out the way they did, so I guess I was a little surprised by some decisions.

Kevin Costner is good in this, Maria Bello plays the usual coach wife who turns out to be the rock of the family. There is a great ensemble of wonderful Latino actors, which include Carlos Chalabi, Hector Duran, Michael Aguero, and Jonny Ortiz. All of these young actors deliver fine performances. If you liked Morgan Saylor on Showtime's "Homeland," you'll probably like her here. She plays White's daughter and she kind of taps into some of the emotions she did on that show, so its unclear if she really has much range as an actress, but she's fine here. Its pretty hard to screw up performances in sports movies at this point, especially with a cast as strong as this one.

So "McFarland USA" is your typical sports movie, its inspirational fluff. But that doesn't mean that it isn't well made inspirational fluff. I was smiling during the heartwarming parts, crying during the sad parts and laughing during the funny parts. I was also pretty engaged by the entire thing, which is good since most sports movies seem to tune me out nowadays. If you enjoy sports movies and haven't seen this one, check it out. Its different compared to the usual football crowd of movies, just don't expect anything that shatters the status quo of the genre.