It was a pretty slow week last week. That's not because I didn't have anything to really write about, just nothing that tickled my fancy. Plus, I got a big promotion at my day-job and that has been sucking the energy from me in some ways. I am very happy and blessed that I got this position, it just made for a slightly slower week last week. But I've been scourging the internet today and tonight, and I found some interesting stuff that I'd like to drop my opinion on. 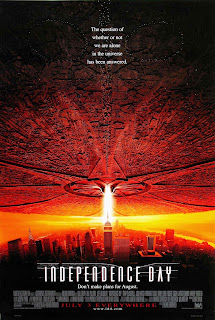 "Independence Day" was a huge part of my childhood. I can't just not be excited for it. I think I've probably watched that movie the most growing up. Instead of Saturday morning cartoons, I put on "Independence Day." I love the movie, and the prospect of a sequel has been far overdue. I get it though, former Fox executive Tom Rothman torpedoed the sequel for years, for God knows what reason. (I may write a special piece on Tom Rothman and how he could have single-handedly destroyed Fox.). But now, we are finally getting a sequel. Tonight, we finally got a title. The sequel to "Independence Day" has been titled "Independence Day Resurgence." Since the aliens are coming back to Earth to pick a fight with us, I suppose that title is fitting. This seems like a sequel that will tread water, but the nostalgic little boy inside me won't be able to resist seeing this on opening weekend. Here's to hoping its good!

Wolverine 3 to be based on Old Man Logan?

Wolverine on screen has had high and lows, and that's too bad. He has one of the most unique and richest backstory of any superhero. If handled by the right people, "X-Men Origins: Wolverine" could have been on par with "Spiderman 2" and "The Dark Knight." Sadly, the wrong people were in charge of that dreck. Thankfully, I can rest easy knowing that Fox learned from its mistake and gave a good Wolverine movie people have been craving for years. But all good things must come to an end, and Hugh Jackman has announced that after "X-Men: Apocalypse" in 2016, a third solo Wolverine movie will be his last run as the character. I can understand why, Jackman will have played Wolverine more times that both Connery and Moore played James Bond. I can totally understand why he would want to move onto different things. But that's not the big rumor, the big rumor tonight is that Wolverine 3 will be based on the "Old Man Logan" storyline.

Written by Mark Millar, "Old Man Logan" is set in an alternate universe of Marvel, and fifty years in the future. Red Skull got seemingly every supervillain in the Marvel Universe together and killed all the superheroes. Knowing they couldn't physically kill Wolverine, they killed him mentally and emotionally and in these fifty years, he has not popped his claws once. He lives a peaceful yet desperate life, trying to keep his rent paid to his landlord, who is none other than The Hulk. Yep, when the villains tried to kill Hulk, the green meanie kind of lost his mind. Things look up for Wolverine when he decides to go cross-country with a blind Hawkeye for a big payday, but what is it Hawkeye is up to?

Here's the thing. No studio can make an adequate adaptation of "Old Man Logan" unless they make a deal with Disney. The characters of Hawkeye, Hulk and several other characters who are owned by Disney are too important to the overall plot of "Old Man Logan." Even with Fantastic Four in the hands of Fox, a movie adaptation of this now just wouldn't feel like a true adaptation of the sequel. Fox has to be sure they have something very, very special in their hands in order to make this work and I just don't know if they do. If we get a scene of Jackman fighting a dinosaur, it may turn into something. We shall see.

Let me know what you think of these stories.