I have really enjoyed the "Hunger Games" movies so far.

I have enjoyed more than I thought. Not because of who was involved, but mainly because it seemed every young adult novel was being adapted to the big screen at the time. As trends usually go in Hollywood, some do well and many fall. I was happy to see that "The Hunger Games" was not a franchise that fell. It is something that was commercially and critically successful, and it also drew in the general audience. That isn't easy by any means, and how the franchise has been able to do that has been fascinating every year.

If you remember from my review of Part I of Mockingjay, I liked the movie quite a bit. I just felt the need to chop the movie in half was based solely on monetary purposes instead of creative purposes. If this last half of Mockingjay sucks, then it will render Part I a completely useless movie. That is the danger of this recent obsession of dragging the finale of these series' into multiple pictures. Can Hollywood create a cliffhanger that will satisfy audiences? It is tougher than you think, especially if a book doesn't really have a middle of the road point. I hope this finale for "The Hunger Games" is epic to the point that we forget that the split-in-half last book wasn't needed.

The first poster for this movie is pretty effective.

It pretty much sums up what we can expect from this last movie. 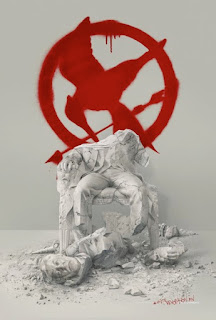 Posted by Shawn Hoelscher at 7:51 PM