Details on the second season of Marvel's Daredevil 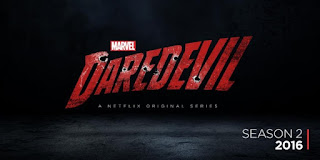 You know what your looking at there?

This is the official logo for season two of "Marvel's Daredevil," a show that became the superhero show to beat this year practically overnight in April.

I had a blast with the first season. You can read all of my thoughts on the first season here. I wondered how long it would be before we saw more Daredevil, because the plan has always been introduce Daredevil, then introduce Jessica Jones, Luke Cage and Iron Fist before putting them all together for a mini-series. Now it seems we could have a few seasons to get to know some of these characters before they all get together, something that wasn't necessarily the case for introducing Iron Man, Captain America, Hulk, Hawkeye, Black Widow and Thor pre-Avengers. Plus, with thirteen hours instead of roughly three, that's an awful lot of character development.

Today, it was also announced that our other favorite characters from the Marvel canon will be introduced this season. 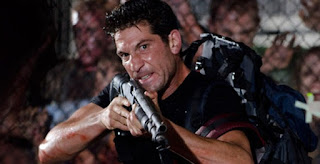 Jon Bernthal, famous for playing Shane on the first couple seasons of "The Walking Dead" has officially been cast as The Punisher for season two of "Daredevil." This completely blindsided me today, as I never expected such a character to be introduced on this show. This is great news for the character, and for the MCU in general. I don't know how many of you saw the Dolph Lundgren Punisher movie in the 1980s, or the Thomas Jane film in 2004 or the much lesser Ray Stevenson movie in 2008, but The Punisher is one of the most badass characters ever to be brought to life by ink. The character is in perfect hands and Marvel proves once again that they can cast their characters well. Now I am wildly curious to see how The Punisher will involve himself in this story.

There has been some minor talk about Jason Statham appearing as Bullseye, Daredevil's arch-nemsis, but that may NOT be completely true yet. All I can say is that I am excited and I can't wait to hear more. Now Marvel, go find the perfect Iron Fist already.


Posted by Shawn Hoelscher at 8:39 PM