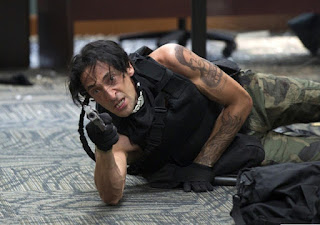 Here is a nice movie cocktail for you. Take a direct-to-video crime drama script, add two good-looking, well-accustomed actors, then add the hollow, unexplored philosophy of "Killing Them Softly," throw in the familiar heist moments and a throw-away romance from Ben Affleck's "The Town" and a nice splash of Grand Theft Auto. You know what you get? "American Heist" is what you get.

"American Heist" is slick to watch, and it goes down easy. You can tell that Adrien Brody, Hayden Christensen and Jordana Brewster are trying really hard to make this matter. And I'll give Christensen this, he is more alive here than he has ever been in his entire career. Look at the "Star Wars" prequels, look at "Jumper." In general and in my opinion, I find Christensen to be a very bland, very dull actor. There are times when you cheer for him here, and there are times when you can identify with him. It's just tough because the rest of the film is so unimpressive. There is very little in this film that you have seen before and much better. "American Heist" is pieces of other crime dramas, and if you haven't seen a huge number of movies yet, there is a chance this could work for you. Due to the cast, and the slickness of the action and cinematography, the film is well polished. But its just better than your average Video-On-Demand film that you watch when nothing else is on.

Christensen plays James and Adrien Brody plays Frankie. Frankie is a man fresh out of prison, and James is a simple mechanic who is haunted by a life he had with his older brother. He wants to rekindle an old flame (Brewster), not jump in on a life-changing job and return to his criminal urges with his older brother. But James wants to open more garages and start a small business, which his bank is unwilling to invest in, and as you could have guessed, he has no choice but help his brother and his friends with their huge bank robbery. Oh, and get this, James is the getaway driver!

Could you have guessed the synopsis before I finished writing it? I bet you could, and I am sure you can guess how it ends. The final shootout between the cops and the robbers feels too borrowed from films like "The Town" and "Heat" to really be inspiring. There is a moment when one of the robbers shoots a police helicopter out of the sky. I remember laughing and mocking the scene in my head as I watched. I guess the stuff that is cool in a Grand Theft Auto game isn't automatically cool in the world of movies. That is the problem with a lot of the movie, it just feels too borrowed from other movies. It never once feels like its own thing. Even the rhetoric about how banks are destroying our country MIGHT have been more apparent if it weren't for a movie about this subject coming out three years ago.

Adrien Brody is proving he has range. I love that he can do something as offbeat and odd as "The Grand Budapest Hotel," then also do something like this. I just wish I liked this better. Brewster also does what she can. But she gets the female role in which she gets herself into a romance we know can't end well, yep that character. Underneath all the style and coolness, "American Heist" is just another straight-to-video actionier that features more pop culture references than an episode of "Family Guy."