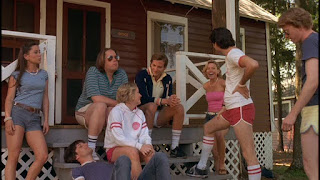 I had never seen "Wet Hot American Summer" before last night. I had no idea that so many talented actors starred in it. I had no idea that H. Jon Benjamin, who I have appreciated as a voice actor for the last eight or so years, gave voice to a can of vegetables in this movie. I never knew David Hyde Pierce was so funny outside of "Fraser." I had no idea Paul Rudd could be such an asshole. I don't know how many of you have had the chance to experience "Wet Hot American Summer," but if you haven't, now is the time.

I can across "Wet Hot American Summer" as I read online about its revival series on Netflix. You can bet that revival show will be my television write-ups on this blog now that my MCU shows are done for the summer. When I read  that so many talented people, like Bradley Cooper, Amy Poehler, Christopher Meloni, Paul Rudd, Elizabeth Banks, Janeane Garofalo, Ken Marino, Joe Lo Truglio, Kevin Sussman and Molly Shannon were in the movie. If you haven't heard of any of those actors, try Googling them. I can bet good money that will at least recognize them by their face if anything. These are some of the best and most underappreciated performers in comedy today. Its interesting seeing them in this, mulling over their careers, and once hearing about this movie. Now that I have seen it, I can't wait to see what Netflix and the rest of the company plans to do with the storyline of these characters.

So, what's "Wet Hot American Summer" all about? Well, its about nostalgia. The movie takes place on the last day of an eight-week long summer camp. As summer camps go, the adolescents attending this camp are trying to get one last make-out session with their summer fling just as bad the camp councilors are. Everybody wants a little last-minute romance, and the movie mainly focuses on the councilors. We focus on the relationships, the togetherness, the break-ups, the wild and crazy fun they create, the kind of fun that could only be mustered on the last night of summer camp. Come on, don't kid yourself, you know what I am talking about. We have all had that one summer. That summer where we discovered the opposite sex and looked at them in a different light. That summer where romance was budding, and our hormones could barely teach us what to do with these feelings. That summer where being young and having fun meant something. You'll definitely be reflecting on your past and how much fun you had growing up during the summertime.

Its also funny as hell.

But is that honestly that surprising? Take another look at the cast up there, was there any doubt that this wouldn't be funny? Not only is the script great, but the actors do everything they can to make this count, and it was more than enough from everyone. To pick a favorite character is too difficult, and you will notice that there are big scenes from all the characters, and you will appreciate each character in a different way. (Either that, or you will love to root against them.) There aren't too many movies rich with wonderful characters. People you feel like you could hang out with and be friends with. That is the type of cast we are dealing with here, and it is miraculous.

I also love that the movie didn't really follow the usual clichés and norms of the genre. This is a homage to 1980's comedies, yet it has a voice that is strikingly original. This also doesn't have the end in the conventional sort of way, it actually ends sort of bittersweet, just like those young love summers usually ended. The film is unpredictable in the way that nobody can really call what is going to happen next. There is so much of the movie that was alarmingly crazy and there was no telling what shenanigans you would see on the screen next. I love a movie that doesn't feel like anything I have seen before. Believe it or not, "Wet Hot American Summer" did that for me.

So as a brand new hot season begins to take hold on us, this is the perfect time to see this unsuspecting gem. I hope you all are as enthusiastic about it as I am. You can also bet that this won't be the last time I write about this characters this summer, and I am very much looking forward to it.
Posted by Shawn Hoelscher at 6:49 PM