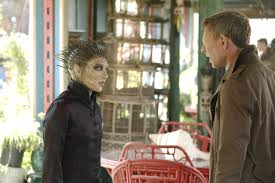 First of all, the power struggle between the competing fractions of S.H.I.E.L.D. seemed summed up pretty fast. For a group of agents who didn't trust Coulson and some of his actions, to just jump onboard with him after a whimsical speech seems rushed. I figured the power struggle would last until the end of this season, but they wrapped it up, with very little tension. That is a problem with most of the MCU media so far, I don't know if it stems from being under the Disney banner or what. But the need to wrap everything up in a sweet, happy ending I think is a little absurd. Yes, this is a show set in a comic book world with super powered people. But even some of the best stories from both Marvel and DC didn't always end happily, or at least at some bittersweet tidings. But it seems all the knots tied between these two factions is swept under the rug really quick to focus on the Inhuman story, which is too bad and handled not the best.

What surprised me about this episode though was how interesting the Afterlife stuff was. This has always been my least favorite material each episode, and now the Inhumans inhabiting The Afterlife really stepped up. So much so that ripples were felt, I can't imagine Marvel making an "Inhumans" movie in 2019 and completely ignoring what happened tonight, and now I am ready for next week. You see, despite foreseeing the Ultron threat last week, not many people trust Raina. It is easy to see why as her allegiance has been all over the map since the beginning of the show. But she now can see into the future, but is she serving her purpose or the purpose of the Inhumans? She foresees a struggle with S.H.I.E.L.D. It is somewhat true, S.H.I.E.L.D. wants to go to the Afterlife and take a look around, see what its all about, see how many people are living there and record their powers. Its all for safekeeping and Agent Gonzalez really begins to gain the audience's trust back. For a long while, I thought he was going to become a villain by the end of this season, harboring some kind of vile secret.

Not true. The vile secret isn't from Gonzalez. It is not from Raina. It comes from Skye's mother, she kills Gonzalez and frames S.H.I.E.L.D. For the two-hour finale next week, we are going to see a war between Inhumans and S.H.I.E.L.D. Like I said, this better get referenced in the movie in 2019, because this really changes everything. Does this mean Raina will become a villain, where will Skye lie by the end of this once she finds out that her mother is a villain? Will she ever find out and how? Plus, what is going on with Grant Ward? Because he and Agent 33 have Bobbi Morse kidnapped, and how  they fit into this formula remains to be seen.

Tons is on the line for next week, and I can't wait to see how it all ends. What did you think of tonight's episode?