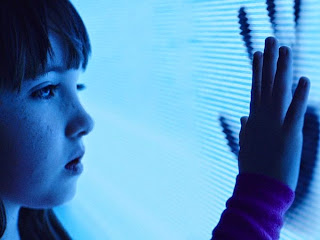 I liked the original 1982 "Poltergeist" movie. One thing that stood out about it was that it tried to reinvent some of the norms and genre clichés of horror. One thing that was different was that it took place in suburbia. No longer did horror movies have to take place in houses that looked haunted, but homes that looked like the homes we all grew up in. I also loved how subtle a lot of the horror was in the original "Poltergeist" (I especially like the scene when all the chairs are stacked crudely on the table when the mother steps out for a second.) Plus, the movie had several good money shots (particularly the clown scene) which I felt paid off in a big way. The idea of a family moving into a house which was built on top of a Indian burial ground is a juicy idea for a horror movie and it left its mark I think.

In the 2015 remake, we get Sam Rockwell as the father instead of Craig T. Nelson. We get Richard Harris instead of Zelda Rubinstein. Instead of a Indian burial  ground we get a simple cemetery. We also get a lot more horror involving today's technology, simply because it did not exist in the early 1980's. I don't mind changes, I can live with changes, especially when somebody is remaking a movie from the 1980's for today. What kind of bothered me was how dependent this remake was on the original and how non-frightening it was as a whole.

The big thing that sticks out for me is the overabundance of special effects. Remember the chairs stacked on the table in the original movie? Remember how strikingly realistic it looked? Well, in the remake, it is replaced by a CGI stack of comic books, and it just has less of an impact. Remember the famous clown scene I discussed above? A evil toy clown popping up from behind a little boy is far more scarier than a CGI clown jumping out at the audience. So much of the movie relied so heavily on visual effects that it takes any threat out of everything. The original may have dealt in the supernatural, but it made what we were looking at threatening. It still had the strength to scare. Here, everything looks so severely unrealistic that nothing creepy sticks.

Then there is the entire set-up of the movie itself. Remember the "Psycho" remake from 1998, which was literally a frame-by-frame remake of the Alfred Hitchcock classic? Well, I wouldn't say this remake is a complete telegraph of the original "Poltergeist" but it might as well be. This is the karaoke version of this movie. A movie that only wants to interpret the original, never having its own voice and never approaching the material in a very creative or invigorating way. There is only one scene which I feel director Gil Kenan really tried to expand on the "Poltergeist" mythology, one scene where he really tried to make the movie his. It involves a drone plane, a camera attached to it and an Ipad. We actually see the other plane of existence that spirits occupy. Its a scene that was never in the original, but it is creepy and moody. It is just about the only time doesn't feel like a remake, and I wish the rest of the film played out like that.

I think Rockwell and Harris do good work here. I think the rest of the cast, which includes Rosemarie DeWitt, Nicholas Braun, and Jane Adams. I think the cast does exactly what they were asked to do, straight across the board. They definitely try to milk as much connection and tension from the script that they possibly can. I just really wish that script was better.

Sadly, the "Poltergeist" remake clearly was motivated by nothing more than money. I know when horror buffs reflect on the best of the best in the genre, "Poltergeist" doesn't come up. But I think it deserved a much better remake than this. I think there are good performances, and I think there are moments when director Kenan really wanted the movie to stick out, but its ultimately not enough.