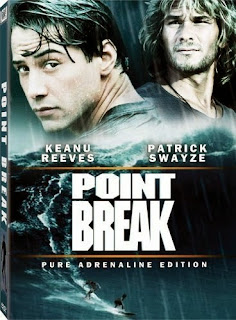 One of the first movies Katheryn Bigelow ever made was "Point Break" in 1991. It followed a rookie FBI agent played Keanu Reeves. Reeves was put undercover to investigate and infiltrate a group of bank robbers who just happened to love surfing. The leader of this group of extreme bank robbers was Patrick Swayze. "Point Break," in my opinion, was one of the biggest action clunkers of that decade, and just a horrid movie all around. Keanu Reeves was as half-asleep as always. And Patrick Swayze as a villainous bank robber? Yeah, I'll let you laugh at that for a bit. While I usually grown when a movie gets remade, this is one of those rare instances when a movie was being remade that dramatically needed it.

To my astonishment, the 2015 "Point Break" seems like it is really distancing itself from the original. Oh sure, it has  to do with bank robbers who love sports, but they are not just surfers. According to the trailer, they are involved in a wide array of sports. They don't seem to be aimless robbers either, these are bad guys who seem to have an agenda, but what is that agenda?

Replacing Patrick Swayze with Edgar Ramirez is a stroke of genius, and it seems he is giving his all for this. I can't tell you much about Luke Bacey, who is replacing Reeves here, but he doesn't have the half-baked demeanor Reeves almost always carries, so that is a plus. I also like seeing Teresa Palmer, Delroy Lindo and Ray Winstone in the trailer. That is awesome.

So perhaps "Point Break" will be a different kind of remake and it might turn out to be good. Lets see how it goes.


Posted by Shawn Hoelscher at 8:17 PM