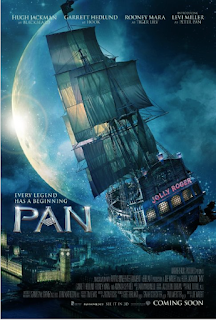 I have noticed growing up that the stories of Peter Pan have been very hard to adapt for Hollywood. The Disney animated classic is great, and the 2003 film is pretty good. But the other adaptations out there, not worth my morning poo's. That NBC musical version last year is something I wish I could forget. I know many people grew up captivated by "Hook," but it was simply not for me. Peter Pan growing and forgetting he was Peter Pan seemed lame to me even when I was so young. The story of a boy who never grew up and battling pirates seems like something that would be hard to mess up, yet we have so few good interpretations of the character onscreen.

Joe Wright's "Pan" is coming our way this October, and you'll see from the trailer, it is breathtakingly beautiful to look at. I mean the trailer is gorgeous. I get the feeling that we are in for an imaginative and creative adaptation of this material. The costume designs and settings seem a little over-the-top, but curiosity has struck for me over anything else. There are just two things that are nagging me about the trailer. First of all, this looks to be an origin story, a prequel to everything involving Wendy. Prequels are tough water to cross for Hollywood, which automatically puts me on edge. Second of all, do we really need another "Chosen One" story? Didn't anybody learn anything from Sony and "The Amazing Spiderman?" Was there no other path to take other than the Peter Pan being the "Chosen One?" I hope they make a satisfying story from this concept that slowly becoming a cliché.

Anywho, beautiful trailer. Tell me what you think

Posted by Shawn Hoelscher at 7:50 PM