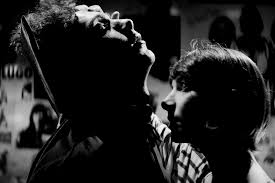 Have any of you been wondering when vampires will go out of style? The answer to the question is most likely never. Especially when people are discovering different ways to reinvent the characters or to continue to keep them relevant as in "A Girl Walks Home Alone At Night."

"A Girl Walks Home Alone At Night" is a lush black-and-white fairy tale from Iran. This particular fairy tale has to do with the realm of vampires. Its too hard to make a movie just about vampires and bring absolutely nothing else to the table, and it seems writer and director Ana Lily Amirpour knew that going in too. Setting the movie in the fictional town of Bad City and making the vampire a woman who is very specific who she chooses to feed on is the grand metaphor for the entire movie. The rights of women in that region of the world is laughable, and Amirpour is able to paint a convincing picture of life as a female in that part of the world through the eyes of this particular vampire.

The vampire is only known as The Girl and she is brought to life by the magnificent Sheila Vand. The genius of Vand is how she creates an entire character with very, very little dialogue. There are movements she makes that are surreal and sometimes off-putting, and her silence gaze is absolutely nightmarish. There are moments where she listens to music in her room by herself, in a room whose walls are covered in pop culture. What should come off as gimmicky and humorous is actually quite breath-taking. I'll have more on that in just a few moments.

The film also focuses on Arash (Arash Marandi) a gardener who is struggling to get by in Bad City, especially since he has to take care of his father who is buying more heroin than he can afford, which brings Arash in contact with Saeed (Dominic Rains) the drug-dealing pimp who Arash's father buys from. Arash has to clean up his fathers mess, which forces him to grow to hate his father and Saeed. As The Girl targets Saeed for a feast, Arash sneaks into his apartment and takes a briefcase full of drugs and money, destined to begin a new life with less troubles. Then Arash eventually meets The Girl, and both of their personalities begin to change. Arash finally finds someone he feels he can care about, while The Girl may have found a connection with a human that doesn't involve the drinking of their blood, can they make this last?

Some of you maybe getting "Twilight" vibes, but I assure you this is absolutely nothing like "Twilight." Heck I wouldn't even compare this to the vastly superior "Let The Right One In" which dealt with a human falling in love with a vampire. I am not sure Arash and The Girl ever officially fall for each other, once they discover each other's true nature, they are both taken aback as to how this could possibly work. They both have very conflicting world views and those views could eventually cause trouble. There is absolutely nothing lubby-dubby about "A Girl Walks Home Alone At Night." This almost feels like a Quentin Tarantino vampire movie with a lot less violence. The movie is packed with style and a few quirks. But at the same time, the movie is hypnotically surreal, as if you are watching someone's dreams play out in front of you.

What is truly astounding about "A Girl Walks Home Alone At Night" is how beautifully music parallels the emotional payoff of a scene. There is a moment when Arash and The Girl meet, and she takes him back to her house because he stoned from a party he was leaving. The Girl turns on what sounds like a 1980's new wave song, and the way each character reacts to the music, and how they begin to react to each other is quite brilliant. It is easily the best use of music in any movie in a very long time, if you ask me. It is as if Amirpour had the song in mind when she wrote the scene or had the song written for the scene. The song makes us feel the exact same emotions as the two characters on the screen do and it is a wonderful sync.

For the adventurous movie-watcher, there is quite a bit to love about "A Girl Walks Home Alone At Night" and definitely something worth checking out.