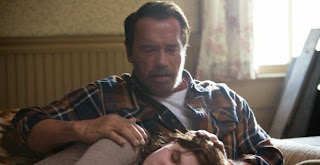 What has made me laugh more over the years as a film fan is the big difference between an actor and a movie star. If you are an actor, then I think you have to have at least some talent, whether misguided by the media or not. But if you are a movie star, you don't necessarily have to give a good performance when you step in front of the camera, you just have to bring a certain group of character charms and details to each character you play. I think its pretty safe to say that Arnold Schwarzenegger has fallen under the movie star category for his whole career. I have enjoyed several of his movies, but him as performer? Much less I am afraid. Movie stars tend to use the same bag of tricks for each movie, and why not? Those tricks sell, so why not use them until they have gone much past their expiration date. Whether you think it sounds harsh or not, we have enjoyed Arnold Schwarzenegger as a screen presents, but there are very few movies in his career where I can honestly tell myself that I thought he gave a good performance.

Out of all the horror subgenres it seems zombies are very straightforward. Or, I guess I should say that they have played out pretty straightforward for awhile. No matter what a storyteller is trying to convey with the genre, it has always come down to a group of people trying to survive the zombie onslaught. Each of those type of films boil down to the same template, no matter if the director throws in a certain metaphor or if they just wanted to make a good, old-fashioned zombie movie, they come down to a group of people trying to stay healthy. Hey, I love "The Walking Dead" just as much as anybody, and while that comic book and show tend to focus more on human nature than surviving the zombie apocalypse, it is in the end, about a group of survivors fighting for their lives against the undead. This begs the question; can anything else be done with the genre? In recent years, we have seen some filmmakers really approach the zombie movie in a different light, and whether I have liked or disliked their execution, I find their attempts to be ambitious, and that counts for something.

Now, when I put Arnold Schwarzenegger and zombie apocalypse in the same review, I bet that your thought process is preparing you for a certain kind of movie. Yes, "Maggie" is about a zombie apocalypse (well, a zombie apocalypse of sorts) and the film's male lead is indeed Arnold Schwarzenegger. But trust me, this is anything but what you'd figure when both of those ideas collide in a movie. "Maggie" is not your conventional zombie movie. There is very little blood, very little killing. There are no explosions, no beheadings, no group of survivors. As much as "Signs" was an alien movie without the alien invasion, "Maggie" is a zombie movie without the apocalypse. Depending on what you expect from your zombie movies, this may disappoint you.

After his daughter has been missing, Wade (Schwarzenegger) spends two weeks trying to find her after she has ran away. He finds Maggie (Abigail Breslin) at a hospital, and discovers she has been bitten and infected with the "necroambulist" virus, which will turn her into a zombie within a matter of weeks. The rest of the movie focuses on Wade and Maggie, and it is a slow burn until Maggie completes her transformation into a zombie. I wouldn't even call "Maggie" a horror film, and again, depending on what you like from this genre, that may kill your interest in this movie altogether. At an hour and thirty-five minutes, it is sweet and to the point.

Now, for a movie with no big action set pieces, you are probably wondering how Arnold does. Honestly, this is the first time where Arnold had to really rely on his acting, and for the most part, I think he does a good job. What stinks is that he really doesn't have a role to play. Wade is a man of very few words in this movie, and he spends lots of the movie trying to cope with a massive decision regarding what to do about his daughter once she has fully transformed. While I loved his character interactions through most of the film, Arnold's character spends most of the movie starring off at the sun, trying to find an answer, even though he knows there is no easy answer. There are some big character beats I think he lands well, but ultimately, he has no part to play. For being intrigued to see if Arnold had any real acting skills, I felt that was kind of a letdown.

The main reason to see this movie is for Abigail Breslin. The character of Maggie is quite melancholy and Breslin makes sure we feel every bit of her sadness, while we also feel every bit of her deterioration. There is absolutely nothing beautiful about Maggie's transformation through the movie. The make-up and special effects used throughout the movie are solid and provide great subtext and Breslin carefully etches in the context. It is some of the most magnificent acting I think she's ever done and I can say with confidence that she has grown as a performer. I think Breslin handles her transformation really well and I think audiences will be shocked to see how well she does here.

I know, I know. Still it isn't your typical zombie movie. This is a movie that focuses on a much quieter corner of a zombie epidemic. Instead of groups of survivors hiding out in a mall, this short story focuses on a father and his daughter in their house, trying to fight the upcoming storm. There is only one zombie attack in the whole movie, and it never becomes overly-stylized. It is over pretty much before it begins, and like I said if you expect a certain level of survival and bloodshed in your zombie movies, you might as well skip this one all together, because this doesn't become violent or thrilling. This is "The Walking Dead" with no zombie attacks, it is a straight-up sad story about a terrible decision that needs to be made. The movie even does a good job of keeping its cinematography dark, with no sign of light anywhere. On that basis alone, I enjoyed the ambition behind this, it takes a lot to try to do something different with a genre that is popular for "more of the same" and the crew behind this one really tried to be different and I was struck by how powerful some images and performances played out.

But the slow-burn payoff? Not what I was hoping for and I think that is what ultimately disappointed me the most. A slow-burn movie is tricky because the ending you are building towards needs to have a payoff that will send audiences reeling out of the theater and instantly get caught up in discussion about what happened. The best slow-burn movies did that, and I think that is where "Maggie' fails. It is a rather predictable finale, and never reaches the epic conclusion it seemed to have wanted all along. Still, I like the ambition, and this one seemed like it got away from them. I hope Schwarzenegger keeps up his daring filmography as I'd really like to see him tackle more roles like this.