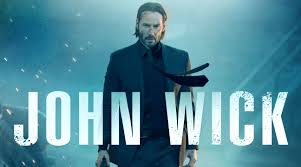 "John Wick" was a movie I thought I was going to hate, but ended up loving. My review is out there to prove it.

Now I am hearing today that "John Wick" will be getting a sequel.

That is correct, another "John Wick" is in the works. Keanu Reeves will return to play the title role. David Leitch and Chad Stahelski will return to the director's chair and Derek Kolstad will once again pen the sequel. So several people that made the first film amazing are returning for the sequel. This at least, gives me hope.

"John Wick" is good because it sets up a revenge movie in way never attempted before. I am down for any type of revenge film, but the great ones have unforgettable hooks. I feel "John Wick" indeed had one of those hooks. It was a well-directed, well-paced movie. Keanu Reeves, who usually comes off half-asleep in most of his movies, never seemed more alive than he did last year. I have no idea how they could possibly continue his movie, but I am glad they are trying.

I know several friends and critics who are in the same boat as me. Nobody was really expecting this to be as good as it was. I am hoping I am saying the same thing about this sequel. There is no release date yet, but I will definitely keep this on the radar for now.