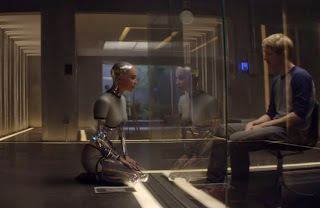 "Ex Machina" is one of the first great movies of year so far.

It is tough to make it one day without resorting to technology for something, anything. We have become hardwired to the very technology that we as a species has invented. Of course, the most exciting, and sometimes the scariest question we could ask ourselves is, where will it go from here? Will there be a not-too-distant future completely run by robots, and will there be human in sight? We already had a decent fill of "technology rules all" type of movies, and it seems as we grow in this Digital Age, our awareness of technology is popular culture begins to grow. From "Terminator" to "The Matrix," we play with these big themes in very astounding ways. Heck, "Avengers: Age of Ultron" taps into the horrors of too much tech and what it can do when somebody gets a bad result from trying to do something good with tech.

Based upon the way I am talking, you probably think you have "Ex Machina" all figured out. Let me tell you right now that you don't. This isn't a cautionary tale, well it is, but it isn't. Not in the way that we have seen it before at least. "Ex Machina" has more in common with something like "Frankenstein" than it does with something like "The Terminator." If that parallel makes you groan, then I will have to ask you to keep an open mind. "Ex Machina" is a bit of a mind bender, it gets weird and heavy at moments, but it is a ride worth taking. It represents the very best of what can be made by computer affects, yet it is a movie that is completely gauged by performance and not all the money getting thrown at the screen.

A young coder named Caleb (Domhall Gleeson) works at one of the biggest internet companies in the world, and he just won a company contest allowing him to visit the private compound of the company's CEO. When Caleb gets to the compound, he meets the reclusive CEO Nathan (Oscar Issac). It seems Nathan has a plan for Caleb over this week, Nathan is going to have Caleb test the first true artificial intelligence. Seems like a bizarre and unreal job, until Caleb sees the A.I. for the first time. It comes in the form of a beautiful woman named Ava (Alicia Vikander) and Caleb must process her through questions to see if she is actually capable of being intelligent. Its a weird gig, but Caleb is drawn to Ava, and plans to pursue this plan.

I know I am beating around the bush, that is all I plan to share about the movie's synopsis. This is a movie where the less you know, the better the experience will be. I only read about "Ex Machina" vaguely, never really reading anything about it, and now at the other end of spectrum, I am glad I did. This is a tremendously powerful motion picture, beautiful as it is bizarre and dazzling as it is daring.

I can say that for long stretches of the film, I loved just watching Domhall Gleeson and Oscar Issac bounce off of each other. This is a fine example of two underrated actors throwing down like they never have before. This will show people why Issac is going to pop up in "Star Wars: The Force Awakens" and "X-Men: Apocaylpse," this guy has been heading toward the big time for awhile now, and this is just another admirable effort to add to his collection of filmography. I have liked Gleeson a lot in the past, but he's never been this determined, he has never been this strong.

The film's true magic trick is making Ava believable. Which is interesting because she is robot form for nearly the entire movie. Yet, even though it is clear we looking at a robot, it is unbelievable how realistic it looks. This is the most realism-based science fiction film that I have seen in a very long time. It goes to show that special effects have the ability to rattle the viewer. Then there is the performance by Alicia Vikander, and all I can say is wow. What gets me the most about her work here is that she somehow had  the talent to come off 100% as a robot, but still have that human capability. It is weird to describe, but there is a calculating method to Vikander's performance, and watching her onscreen with Gleeson was a joy.

I haven't even begun to delve further into the twists and turns in the movie. I haven't scratched the surface of the many secrets the characters are hiding. Honestly? I don't want to spoil the fun for you. Just go in knowing you are going to see the best of performers at the top of their games. Be prepared to see the work of visual effects unlike any you have ever witnessed before. Be prepared to see the beauty of the argument of too much technology in the world. But most of all, be prepared to see the art form of cinema come alive in a way that forces you to remember why you love movies so much in the first place.