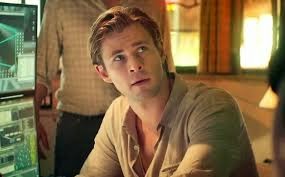 When people discuss what the world would look like during a, God willing, third world war, the prospect always turns to nuclear holocaust. If you ask me, I think if we were to ever have a third world war or if a terrorist wanted to hit the free world where it hurts, they would use technology. There is something very frightening to me about thinking about a world where our money, our accounts and nearly every aspect of our lives is digital. Heck, parts of our friendships are digital and if somebody tried to attack that over political turmoil or even scarier, for fun, we would have a world of problems.

I have always liked Michael Mann as a director, and I have especially enjoyed the way his recent career has materialized. He is just about the only director in the business right now who jumps nose first into the digital art of filmmaking. Even with a period piece like "Public Enemies" from 2009 felt uncannily realistic, and I never thought it would have worked for a film set in the 1930's. Mann has a visual eye unlike any other right now and they way he digitally shoots his films, it really does feel like we are right there, experiencing the film with the characters. "Blackhat" features that type of filmmaking. The way Michael Mann films his cinematography in "Blackhat" is flat-out mesmerizing and the digital glow of all the films exotic locations is almost unreal in how gorgeous it is. What I love about most Michael Mann films is that he makes the audience feel the culture and society of which he is filming and that doesn't end with "Blackhat." We feel the chemical sugar rush of looking into a beautiful hill range in Indonesia just as much as we are struck by the gritty, sweaty slums of the same island. On a visual basis, like most Michael Mann films, there is nothing to complain about.

Then you actually watch "Blackhat," and you allow yourself to become engaged in the story being told and you can't believe your eyes. "Blackhat" is nothing more than an exercise in beauty over anything else. For a film based around a cyber-terrorist, the last thing I should be engulfed with is the cinematography. Mann completely wastes his great cast; which includes Chris Hemsworth, Viola Davis, Tang Wei, Wang Leehom, Holt McCallany, Yorick van Wageningen and Ritchie Coster. He makes his film way too long and makes sure we feel every mind-numbing minute of it. Worst of all, Mann can't seem to help himself when he shows us that this is either a 1990's action film homage or a 1990's action film rip-off and Mann seems blatantly confused by which it is too.

The film opens with a cyber attack on a Chinese nuclear power plant and Mercantile Trade Exchange and Mann wastes no time trying to waste our time. As the evil cyber-terrorist is plotting away in his lair, there is a silly dramatic beat every time he pushes in a key on his keyboard. Then we have several lame scenes of digital information running through computer wires to its destination. I immediately think of several action films which pushed the camera through something mechanical so the audience can see how the device works. This footage could have easily been edited out and the film would have ended the exact same way it does.

So yeah, we have a cyber-terrorist causing lots of havoc. He is taking lives and playing games with international trade and the American and Chinese governments come together to stop him. Apparently the only way to stop this terrorist is to release an American hacker Hathaway (Hemsworth) to help the team go after him. Hathaway is a hero who would only appear in cheesy 1990's action movies. Because even though he is an incredibly talented hacker, he is also apparently unbeatable in hand-to-hand combat and you can bet that the movie never stops a second to explain how Hathaway can fight so well or how he is a master of nearly every weapon he touches. He is also able to swoon the lead female in the movie because, since this is a 1990's action movie, there needs to be an un-needed romance.

"Blackhat" could have been an excellent look at the way our world could crumble if we are not careful about how we handle business and trade in this Digital Age. In the films strongest moments, we really get a good glimpse of how the world could fall with just a few clicks on a keyboard. For some reason though, Mann keeps bringing the film back action picture mode. The climax of the film involves guns, knives and screwdrivers instead of any unique thought on the idea of cyber-terrorism. I can't really put into words how shocked and even border-line offended I was to learn that "Blackhat" is nothing more than a grisly revenge flick with todays cyber scare as window dressing.

Hemsworth is fine here, the entire cast is fine, there is just nothing thrilling or exciting about the movie. Even the action scenes in this movie don't have the realistic zest that Mann has been known for within the last five years. Once again, Mann picks an astounding soundtrack to match the scenes with, but we never feel any emotions from the actors because we are never completely invested in them. As far as Michael Mann goes as an artist, "Blackhat" is an almost complete embarrassment and I have to ask him the question; what the hell was he thinking?