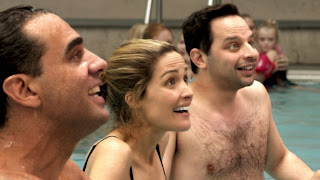 While I do recognize the actor, Nick Kroll is mostly an unknown to me. I vaguely remember him in "I Love You, Man" and in "Date Night," which were two films I did enjoy. I remember him most from his work in "The League." Being a major participant of Fantasy Football, I have never sat down to blast through the entire show, but I will soon when the timing presents itself. I also recently enjoyed his work on a recent of episode of "Brooklyn Nine-Nine," a show I believe everybody should be watching. Other than that, I don't know much about him. I have heard good things about "Community," but I haven't cracked into that show either, and after "Captain America: The Winter Soldier," I will eventually. Doesn't really matter, as I enjoyed Kroll's work in this movie, he seems to carry a movie very well.

Other major parts of the film, I am not so crazy about.

Nick Kroll plays Jake, an uptight, cocky entrepreneur who has that big invention he feels will push him to the riches. The thing is, his business crashes and burns, he looses all of his money as well as cash belonging to others. He is numero uno on several people's hit lists, in a figurative way of course. So he has no other choice but to crash at his sister's place, a woman named Justine (Rose Byrne). Justine has what appears to be a sweet home, a cute kid with another on the way and a loving husband Danny (Bobby Cannavale). That sweet life came with a price though, as it usually does in movies like this. Danny and Justine ask Jake to look after his nephew for $300 a week until he can get back on his feet. Jake, having nothing else to do for profit and needing money quick, he reluctantly agrees.

I think you know where this is heading. "Adult Beginners" is one of those comedies. Its a movie that is essentially a slice of life movie. Its the type of offbeat dramedy's we see from time to time. They always revolve around a man down on their luck. They always revolve around them seeking counsel from their siblings. Those siblings always turn out to be dysfunctional under the glided lives they live. Whomever is married to the sibling is most definitely cheating on them, and after the man spends a certain amount of time with the sibling, they grow together and conquer life's greatest obstacles. Oh, and the man gets a fling-like romance that goes absolutely nowhere. Yep, "Adult Beginners" breaks no new ground, and if you think I spoiled the movie for you, I have a checklist of films I could have you check out, this is absolutely nothing new.

Here is the thing though, I don't need every movie to be absolutely original. After all the stories told over the hundreds and hundreds of years of civilization, is it even possible to create originality anymore? All I know is that as much as I appreciate a fresh idea, they hard to come by, especially in Hollywood. So I don't need every movie to wow me with its freshness, I just need a great story told, I need to feel inspired, I need to get a sense of urgency from the characters and their story. I honestly felt like I didn't get much of that from "Adult Beginners." It's one of those movies that just goes with the motion of things simply because they are popular. Yes, these dramatic comedy's have been going strong for several years now, so when one sticks out as a cliché, it is easily noticeable.

That is too bad, because the cast involved seemed like they were ready to make this one count. I like Nick Kroll as a down-and-out loser who just happens to now look after his nephew. He knows it isn't what he truly wants to be doing, but he has no other choice. He also needs this time to get closer to his sister, because they have been estranged for a long time. I have liked Rose Byrne for awhile, and I love that she continues to step into the comedy ground, and she makes the most of her material, as does Bobby Cannavale. Joel McHale shows up as a good friend of Jake's and he does good work. The only thing is he is barely in the movie, he doesn't have enough screen-time to warrant being put on the poster. But he's an attractive name, so he goes.

I really don't even think the title "Adult Beginners" really illuminates the ideas the movie tried to convey. Sure, there is a plot where Justine and Jake share Justine's son in a adult-child swim class. The ending tries to parallel Justine's sons swimming with the story being told, and we are supposed to be this emotional crescendo at the very end of the movie. It never really goes anywhere though, and the movie just feels like a series of events with no theme, no moral to the story, nothing of the case.

Plus, with any comedy, I need to laugh. I watch comedies because I want to laugh. The most important thing for me going into a comedy is how much I laugh. I have to say honestly that I chuckled a few times. That is it. There is not much funny material in the film, and I don't know if I can completely recommend a comedy that did not make me laugh, no matter how much I like the actors and their performances.