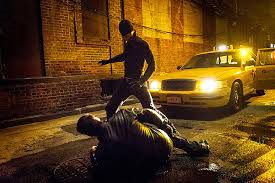 When I heard that Marvel had a plan and that new plan involved Netflix, I was both curious and worried. The realm of television has changed drastically in just the last few years. Gone are the days of submitting a pilot to a network in hopes of getting a season deal. Apparently, if an idea sounds good that is ample enough to cash in on it. Netflix made a deal with Marvel to produce four different television series’ all leading up to a mini-series. It is basically a mini-Avengers if you will. That is a really big gamble for the streaming service, since they green lit four shows without viewing any pilots beforehand. I know its Marvel, but Marvel doesn’t necessarily mean untouchable.
I really don’t know why I expected that though, because through “Daredevil,” Marvel has created one of their best media offerings in a long while. Sure, it is not as big or bombastic as “The Avengers,” but it is a calculated story that allows all of its characters to flourish. This is a superhero show that has mesmerizing action, but the way and the will of how we get to know the characters is almost unreal. The story is brought to life by an incredible ensemble of actors and actresses. Even though it is set in the Marvel Cinematic Universe, the show does a good job of creating a world Daredevil encompasses, and then builds that in the same playground as Cap and Hulk and Thor and everybody else.
I have already noticed people asking about whether or not this show is set in the Marvel Cinematic Universe and the answer is a resounding yes. What I liked about “Daredevil” is that it does not go out of its way to make sure the audience knows that it takes place in the MCU. One thing that gets annoying about watching “Agents of S.H.I.E.L.D.” is with nearly every episode, we have to cut away from the action in order to have a half-assed reminder that the show takes place in the same continuity as the Marvel films. We don’t need this fact slapped over our face all the time. While “Daredevil” makes some slight references every once in a while, the show mainly focuses on the story it’s trying to tell. We get a really good sense of who Daredevil is as a character as well as the people around him. The characters in this show discuss The Battle of New York or The Avengers in a very general way, as if they are people reacting to these events. They do not drop a name just to merely drop a name, which I liked quite a bit.
I have heard complaints about the overwhelming amount of origin stories there are in the world of superhero media. One thing I think will draw many people to “Daredevil” is how quickly we move through the character’s particulars. In the first episode, we watch a quick seen of a young Matt Murdock losing his sight after saving an old man in the street, the accident released chemicals which harmed Murdock’s eyes. It is a brief yet effective scene and we are quickly swept into the present day, where an adult Matt Murdock (Charlie Cox) having a confession with his local priest, and he bluntly states that he has to step up his efforts in order to stop the evil that is plaguing his city. After that the show is off and running, only lending some minor flashbacks to fill in certain gaps. Such as young Matt losing his father, and young Matt meeting Stick (Scott Glenn), a mysterious blind ninja who trains Matt to fight for unknown reasons. The show skips several superhero clichés and gets right into the show, trusting its audience to understand this world.
Let’s talk about Charlie Cox for a minute. The best thing I can say about his performance is that he firmly got the bad taste Ben Affleck left in my mouth over ten years ago. He becomes both Matt Murdock and Daredevil in equal measure and can play both sides of the role well. He creates a highly intimidating figure as a nightly vigilante and he gives Murdock the quirk and intelligence the character needs, and he slowly etches in the right details. Sometimes, I think certain comic characters work better in TV format than they do in movies, and I think Cox gives that statement real truth here. 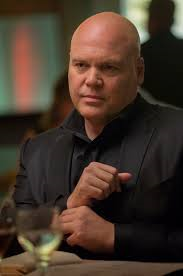 Another big complaint I hear a lot regarding the MCU is its villains. Besides maybe Tom Hiddleston’s Loki, the franchise is infested with one-dimensional and formulaic bad guys. I have made the exact same complaint in some of my reviews. I can say with confidence that Vincent D’Onofrio’s Wilson Fisk will possibly become the villainous favorite of the MCU. The show really takes its time building Fisk as a character, even going as far as to make us care for him, and he’s brought to magnificent life by Onofrio. The show’s main villain gets a love story, which is something that barely happens in stories like this and I loved how Fisk had an episode or two revolving around his meeting of a Vanessa (Ayelet Zurer), an art vendor who connects with Fisk. I love that the show takes its time to build their relationship, and I love how each character is drawn to the other’s darker side. This isn’t the same romance that Robert De Niro and Amy Brennerman shared in “Heat,” both of these characters hold hands as they venture into the darker corners of their psyche and it is really exciting. Fisk is a man of various power and resources and it hurts worse when he beats Daredevil since he is a fully humanized character. I like that he was somewhat painted as man of the city, who views Daredevil as an obstacle more than giving the hero a bad guy because the story demands it.
The rest of the supporting cast is rock solid. I loved the work of Elden Henson as Foggy Nelson, Murdock’s best friend and partner in their independent law firm. I loved the work by both Deborah Ann Woll and Rosario Dawson, who play Karen Page and Claire Temple; two women who affect the lives of both Murdock and Foggy in different ways. I also got a huge kick out of Toby Moore, who plays Fisk’s right-hand man, and I can tell he enjoyed being particularly snarky. I also really liked the work of Vondie Curtis-Hall as Ben Urich, an investigative reporter who comes into contact with Daredevil.
This is the most brutal thing the MCU has to offer right now. The fights in this show are painful to watch, blood gets everywhere, limbs are lost and bones break. This isn’t a show with alien technology and supervillainry, because that is not quite the world Daredevil populates. Daredevil is a street-level hero, and I liked that his show featured street-level threats. The worlds of organized crime, murder, drugs, corruption and human trafficking are very dark worlds and there is not much light in this show. I liked it though, that is how it needed to be. I don’t want it to sound like the show isn’t fun, because at times, it is. There is some good humor and the fight scenes are overwhelmingly awesome. There is one in particular when Daredevil saves a boy kidnapped by Russian gangsters and how the camera moves through the apartment building, never cutting from the scene, but moving surrealistically to keep up with our hero is awesome to watch.
There are some complaints. Even though Daredevil is a street-level hero that does not mean that he has never encountered any superhuman threats, because he has. Bob Gunton plays a guy named Leland Owlsley, who I thought would become the super villain Owl, which never comes to fruition. Yes, The Owl is kind of a goofy character, but it would have been nice to see. I think the MCU sticks a little too close to realism, when I think it should embrace its comic book roots more. I also didn’t like seeing the death a major character so connected to Daredevil mythology. That particular character should have lasted a few more seasons and he really should not have died at all. Imagine a Batman series with Jim Gordon dying in the first season; the rest of the show’s run just would not be the same, which is essentially what happened with this show. 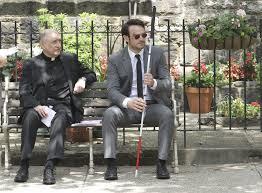 At the end of the night though, I still say this is the best the MCU has to offer at the moment, and I just love that this is so rich in storytelling, yet action-packed and comic-like in equal measure. In a year when “Gotham” is overpopulated and all-over-the-map story-wise, and “Agent Carter” didn’t live up to the hype and “Agents of S.H.I.E.L.D.” is still rising from the ashes of its first season and “Arrow” is taking an underwhelming dip in its third season, we needed a comic book show to kick our ass. If this is foreshadowing for how Marvel plans to utilize its characters on Netflix, then I saw bring on Jessica Jones, Luke Cage and Iron Fist. Give me nine more seasons of “Daredevil.” Give me Punisher and Moon Knight and The Shroud. Marvel’s B-list and C-list could become all-stars overnight. I can really feel that “Daredevil” will resonate with audiences in a big way. More than any other moments in this company’s history, make mine Marvel.﻿
﻿
Posted by Shawn Hoelscher at 9:56 PM