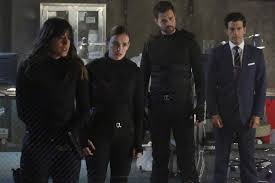 By the end of tonight's episode of "Agents of S.H.I.E.L.D." I am more pumped and more primed to see "Avengers: Age of Ultron" this weekend.

And that is not because of the exclusive scene we saw of the movie after the episode was over either, tonight's episode was supremely solid.

At the end of last week's episode, Coulson and his company allowed themselves to go back to Agent Gonzalez, who is the leader of Real S.H.I.E.L.D. This week, they make an uneasy pact to go after HYDRA. Real S.H.I.E.L.D., Coulson's Team, Grant Ward and Skye all team up in order to track down Lincoln and Deathlok, who were captured last week by HYDRA. Coulson wants to hit HYDRA hard, which is precisely what happens, HYDRA gets hit hard.

How hard? Well, for the first time on the show, Skye kicks some major ass. She does not use her powers too much in the episode. But there is one scene in particular where she stealthily around a big room, killing HYDRA agents with special skills. Its actually quite an amazing scene, something I have a feeling I'll rewatch a couple times once the show hits Netflix. Also, to a surprising degree, Jemma steps up and kicks ass. Well, at least she tries too. Jemma aims for the jugular. There is a scene where Ward attempts to apologize to the team, listing off all the things he know he's done. But it does not matter to Jemma. Jemma tries to kill Ward, but fails. When its Ward's turn to grant revenge, he does not take it. He walks away, it was a big scene for Jemma, but just does not have the big payoff I hoped for.

I had a feeling Ward would not make it out of this episode, but he did. Ward is still one of the shows bigger problems. Simply put, I don't understand how the show can still use him now. Especially since he gets away from S.H.I.E.L.D. and even leaves Agent 33 in S.H.I.E.L.D. custody. What could they possibly do for him now. He may have vindicated himself to a degree, but it still does not matter. He is anchor at this point and his story-arc is already been finished. Just let the guy go already.

But I digress. I love that this episode did not spend too much time in Afterlife, and it allowed Skye to jump right into action. I also loved that the episode did not dwell too much on the rift between Real and Coulson S.H.I.E.L.D. It took some time for everybody to talk to each other, and gather thoughts back, but then it threw us right into the action. This episode featured some of the best action the show has ever unleashed, and that is pretty cool. But I am happy the show didn't stop just to get everybody to make amends. While I feel Gonzalez has some kind of wild card up her sleeve, I think its safe to say that S.H.I.E.L.D. may become one happy family by the time season two comes to a close. We will just have to wait and see how everything progresses. So far, job well done tonight.

What did you all think?