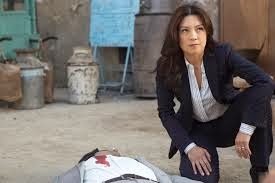 When you are starting any television show or even a movie, it can be difficult to make sure each character is relevant and each character matters. Especially with TV, if we are going to meet up with these characters for huge chunks out of the year, a showrunner and a television writer and the actor portraying the character have to make sure that the audience cares. With team shows or team movies like "Agents of S.H.I.E.L.D." it can be easy if certain characters get lost in the shuffle. I can't help but be reminded of the "X-Men" franchise. No matter how much I love those movies, I feel like there is always one or two characters who never fully realized. That breaks my heart, because the comic writers made it feel so effortless.

Last night's episode of "Agents of S.H.I.E.L.D." was special, because it focused on two important women. Tonight's episode jumped in the passed seven years and in the present, as we find agent Melinda May in a crossroads. We discovered tonight why Melinda is such a badass and the true reason why she is "The Calvary." She was a one-person wrecking ball seven years prior to the action right now in the show, when she saved a dozen agents from a crazy woman with super strength. As we watched May get to know Coulson as a person, it parallels with her newfound role as headquarters director for "The Real S.H.I.E.L.D." Something comes up though, and there may be a chance that Coulson has not been sharing some key assignments with Melinda May, and she is trying to find out what those are, even if at the cost of assisting Real S.H.I.E.L.D. It seems in these last few episodes, relationships are going to be tested, and that really excites me.

What I felt was a little too convenient about tonight's episode was that Melinda mission seven years ago directly connects to a story Skye heard at Afterlife as she is be trained to control her powers. Skye finally learns that the woman in charge of Afterlife, that we saw last week, is her mom. There was a nice family reunion between Skye her mom and Cal. While I liked that the show also fleshed Skye out more as a character, I couldn't stand that Melinda's mission connected to what is going on in the Afterlife, its one of those odd show decisions that I feel is just trying to wring out emotion. I already know that this will come to full circle sometime down the road in this show and I pray that it is worth it. I find it silly and cliché when every little piece of everyone's story connects to the bigger picture. It feels like desperation rather than creativity, it makes the world feel smaller and less urgent. I hope they have a clever way to wrap that piece of the story up.

But focusing on these two women shows us that the crew wants the audience to identify with the cast. That is a good thing. I want to care about these characters. Now, when Melinda finds out whatever she is about to find out about Coulson, good or bad, it will rock the audiences world. That is what it means to create good television.