The Woman In Black 2: Angel of Death Review

The Woman In Black 2: Angel of Death Review 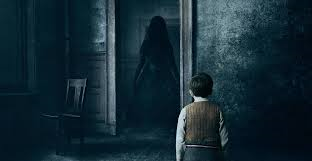 It was the first big movie featuring Daniel Radcliffe after he was done with all things Harry Potter. I was particularly looking forward to it because it looked to be a gothic horror film that promised to be creepy. I usually enjoy a more gothic feel in my horror films, so that appealed to me personally. Sadly, the movie really wasn't that good. While I felt Radcliffe did as good as he could have done, and I think the film had some interesting atmosphere. But nothing else about the film was good. It was not creepy, or scary, or anything of the above. I sat back at the beginning of 2015, dumbfounded to find that "The Woman In Black" was getting a sequel.

In the first film, Radcliffe's character was haunted by a woman in a house of a village he went to in order to fix an affair. In this sequel, Radcliffe does not return. It is a completely different story. Set during WWII, a deputy headmistress Eve (Phoebe Fox) is helping her children escape London so they are safe of the Nazi attack. Along with Headmistress Jean (Helen McCrory), they plan to take care of their children at the countryside town of Crythin Gifford, the same town that Radcliffe went to in the first film. And the children and the teachers just happen to stay at the same haunted mansion Radcliffe's character did. Soon enough, some of the children, as well as Eve, soon begin seeing visions of some ghoulish woman in the house. Of course, not everybody does, including Jean and that causes friction in the group.

I think you can guess where this is heading. Eve argues there is a ghost in the building, Jean argues against it. Some "creepy" things happen, there is a jerk of a child that keeps getting the good kids in trouble, Eve has some nightmares. Then of course, by the end of the film, everybody figures out that Eve was right all along and they stop the ghost from killing any children. Like most films, there a quick little jolt of creepy right before the credits roll too. There is nothing remotely surprising or different about "The Woman In Black 2," but the thing that bothers me most about it is that it wasn't particularly scary.

I give the film some points. There is once again some great atmosphere created as far as the films mood is concerned. Had the movie had a better script to work with, would have made all the difference. Once again, I feel Fox and McCrory did exactly what they were told to do, and for the most part, they do it well. I think they have a wonderful cast of young actors to work with. There is even a love interest with Eve's character. She falls for a combat pilot named Harry (Jeremy Irvwin) and his fate is the normal horror movie cliché, which I appreciated. Plus, I have noticed that I am a lot more sensitive when it comes to children coming into danger in horror films or just films in general. I never liked seeing children die in movies, but after working at a daycare for the last two years, I feel it affects me more than usual. There are a couple of child suicides in the film that are brutal and disturbing, and they definitely got under my skin.

But besides those couple moments? Nothing much else happens. Eve's dreams, which could have been perfect fodder for big scares, are soft at best. The film is telegraphed by clichéd boo scares, which I have explained several times before, do nothing for me. And they sure did nothing for me this time too. There is not much here that I would refer to as a horror film. Nothing that really sticks or that is everlasting.

So I think its safe to say that we should put this franchise to bed.