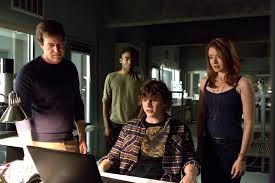 Back in 1983, Stephen King wrote a book called Pet Sematary. It was essentially about a cursed graveyard where if you buried your dead animal or human in it, the corpse would reanimate. But, as these stories often go, the person or animal that came back was never the same as they were before. It was later adapted into a movie in 1989, and while I never read the book, I did catch the movie a while back. What drew me to the story wasn't how scary or strange it was, but how the playing God factor underlines the entire story. I think how our culture is constantly trying to cheat death, constantly discovering breakthrough which will help the next generation live longer is very fascinating and if used right, it can lead to a good horror story.

Here is a look at Pet Sematary in greater depth:
I bring "Pet Sematary" up because I could not help but think of it as I watched "The Lazarus Effect" earlier this week. Because "The Lazarus Effect" is a more scientific version of "Pet Sematary" and it also featured more high-profile actors and a bigger budget. A group of scientists are doing research on reviving the dead. They commit an unsanctioned experiment on a dog and successfully bring a dog back to life, eventually the fiancée of the scientist behind this research dies, and he blissfully brings her back to life, but she's not the same person coming back. With all these special commodities, is "The Lazarus Effect" a better movie?

I was actually kind of surprised how much "The Lazarus Effect" struck me. First of all, I am always engaged when it comes to anything to do with dogs. I know I sound like an innocent, overprotective lady, but it is the truth. I have been a dog-lover my whole life, but ever since my girlfriend and I got a dog of our own, I am much sensitive to anything pertaining to them. The big moment in last year's "John Wick" involving the dog had me burst into tears immediately after it happened. So that subplot in "The Lazarus Effect" definitely pulled at my heart a little bit. The film features a great cast including Mark Duplass, Olivia Wilde, Evan Peters, Donald Glover, and Sarah Bolger, all of whom do great work. I am constantly impressed by how great an acting range Duplass possesses and he shocks me at least once a year. Each actor, taken in as a whole, do what they and they are a good unit. I also appreciated how strange and dark the movie got. I always like some weird darkness in my horror movies and it looked like director David Gelb agreed.

Here's the thing, there isn't much of "The Lazarus Effect" that we haven't seen before and better. It is always tricky to make a movie which is essentially the sum of other movies' parts, because you always run the risk of being too familiar or too distracting and I think "The Lazarus Effect" definitely suffers from that. As much as I was impressed with the film's acting, I don't think Olivia Wilde is that strong of an actress, and she wouldn't be my first pick for a leading lady in any kind of movie. She always comes off as someone reciting lines to me, and that is ever more evident here.

The other big thing for me when it comes to horror movies is that they have to be scary. While I will say there was some off-putting imagery in an experimental sort of way, (the dog appearing in the bedroom, watching Wilde sleep was appropriately creepy), most of the film fails to scare. I really wish more directors in horror would trust their material and their convictions instead of relying on loud music and boo scares. I wish "The Lazarus Effect" tried a little harder to be original or to approach this material in a unique way, but it does not.

Despite what I've said, I think "The Lazarus Effect" is worth a look. If you are fan of the horror genre, you might be swept in by some of the mood the film creates, just expect to sleep pretty easily the night of.