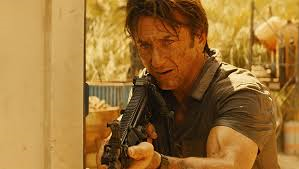 Ugh. "The Gunman" is the worst type of action movie.

Sure, it has actors like Sean Penn, Javier Bardem, Idris Elba, Ray Winstone and Mark Rylance in it and they all do fine work. But still, "The Gunman" is the worst type of action movie. Consider that nearly every shootout takes place in an exotic location, consider that authorities of any kind are never anywhere to be found despite taking place in a public place. Consider that our hero Jim Terrier (Penn) is pretty much an invulnerable superhero throughout the entire movie despite having plaque in his brain which is giving him problems. You can bet those problems kick in right when it is convenient for the plot and I suppose authorities do show up right at the very end of the movie, again out of sheer convenience.  These, and a laundry list full of other gripes, makes me wonder why so much talent was attracted to such a profound mess.

Terrier is an ex- Special Forces mercenary who works as an assassin for a multinational corporation working in the Republic of Congo. (Yes, seeing Sean Penn with such huge muscles is actually more funny than it is intimidating.) After a rising leader in the Congo threatens the corporation they send Terrier and his partners (played by Bardem and Rylance) to assassinate the leader, which they pull off. Terrier flees Africa and eight years after the assassination, Terrier's life is in jeopardy. Terrier begins to travel the world in order to find who is killing him and why.

But I bet you can guess where this goes. In a world like this, there are no clean getaways, and you can bet Bardem and Rylance were behind the attempt on Terrier's life. I would use their character names, but really. what's the point? Despite the acting chops of both Bardem and Rylance, they are just playing types and not actual characters. This is a familiar story of betrayal and corruption, and Terrier spends the movie trying to get himself out of it. While I enjoyed the work of Bardem and Rylance as villains, they really had no real characters to play.

Oh, and there is a woman. Jasmine Trinca plays Annie a woman Terrier fell in love with while he was working in Congo. After the assassination, once Terrier fled, he left without telling Annie a single thing because (of course) she had no idea what his real job was. After the eight year break, and once Terrier starts looking for answers, he finds Annie married to Bardem's character, giggle. Once again, Trinca does fine as Annie, but she's nothing more than a damsel in distress. After the last couple of years and after how many badass women we have seen on both TV and in the motion pictures, why resort to such a tired cliché? Why not make Annie a significant part of the plot? Why not give her something worthwhile to do? There is a big "Taken" vibe from this whole movie, and once Annie becomes leverage, the irony of such a idea really hits home.

There are some decent action scenes and anybody who likes a good action movie will be delighted by some of the film's kills. But I do want to stress the word "some." "The Gunman" is a movie that tries to create a few shocking kills, but only ends up coming off laughable. When your main villain is killed by bull's horn, you know you've done something wrong.

Despite a stellar cast and some mediocre action, I was deeply unimpressed by how unimaginative "The Gunman" was. I can only guess that this "Taken" formula will dry out soon and we can get back to unique and cool action pictures. I don't mind a brainless action movie from time to time, but when I leave the theater with a headache, and not the type of headache I get when cheering with glee at the screen, that is where I draw my line.